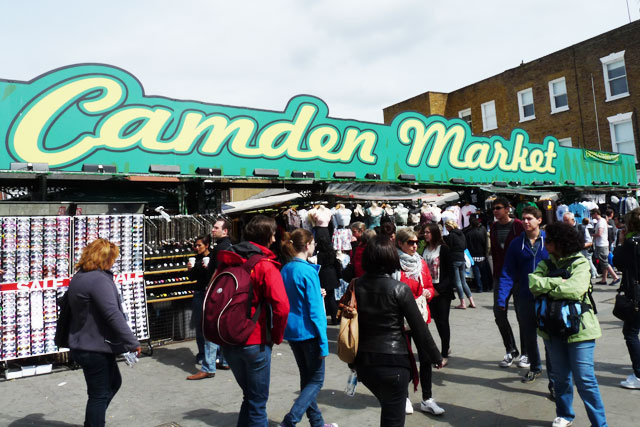 Camden, is located in North London (Camden Town tube station), and like many of London’s inner cities, is a world on its own. Famous for its enticing markets, varied fringe and international shops and vibrant nightlife, Camden hits you with raw originality and shows you what authenticity really is through glimpses of the underground on every street and alleyway. The music scene is diverse and thriving with a medley of metal, punk, rock, tech, hip hop and jazz… There are also tons of different types of restaurants and bars, to satisfy anyone’s senses. Just walking down Camden’s streets is an experience on its own since everywhere you look is art… It’s on the walls and in the windows, through the markets and signs above the roads and, most of all, it is portrayed by the people who outwardly express themselves in a mix of fringe and alternative styles that are all unique.

The notorious Camden Markets, also known as Camden Lock, attract thousands of visitors each weekend. They are a group of 6 large connecting markets situated near Regent’s Canal’s Hampstead Road Lock. It is also known as London’s first arts and crafts market! Their stalls offer an array of products ranging from artisanal crafts and curios to fashion and vintage clothing, books, music and even international foods.

The market started as warehouses which lined Regent’s Canal and were used for storage during the canal trade until 1972. At that point, the empty warehouses became perfect studios for young artists who could have a large space to craft and sell their art from. This is also when the market’s tradition started of being able to see the piece of art you are buying being created right in front of your very eyes!

Camden also has an extensive musical history that led to its status as a landmark in London’s music scene today. Dating back from the 1930’s, Irish immigrants brought their traditional music to the local pubs and dance halls. Then onto the 1960’s when, in 1966, Camden’s first major rock ‘n roll show starred no other than Pink Floyd and the Soft Machine, who played at The Roundhouse. To this day, this timeless venue has seen its fair share of great bands including The Doors, Jimi Hendrix, Led Zeppelin, The Ramones, Motörhead, Blondie, and Patti Smith.

In the 70’s and 80’s, landmark music venues like Dingwalls, the Music Machine, known today as Koko, and Electric Ballroom, reinvented themselves or opened to cater to the massive influx of amazing bands. Wow! What a time that must have been! In the 90’s, Camden was thought to be the birthplace of Britpop with bands such as Pulp, Elastica and Oasis playing many shows there. The Jazz Café also opened its doors and brought more jazz and R&B and later Hip Hop to Camden.

By this time, much of what had expanded still stands today. The club scene had developed into full swing and many of the music venues paired as nightclubs, such as Koko and Proud Camden. Presently, there are also amazing metal, alternative, Goth, rock and punk bars such as, The Hobgoblin/The Dev (The oldest alternative, Goth and metal bar in Camden), The World’s End, Spiritual Caipirinha Bar and The Black Heart, offering great shows and beers. Now a days, the music scene and culture in Camden is just as vibrant as it was and I believe it will sustain its apex of creativity and expression for generations to come.

Camden was and still is a booming epicenter for variety and quality of art, music, culture and nightlife!