With Renfe e-tickets enjoy the ease of train travel in Spain. It’s as simple as choosing your origin and destination from the most popular Spanish cities, seat reservation included! With every domestic destination available for booking, travel aboard Spain’s high speed AVE trains to the likes of Madrid, Barcelona, Seville, Malaga, Valencia and beyond.

Spain’s high speed AVE trains
Spanish high speed AVE trains (Alta Velocidad Española) are famously known for transporting passengers to the most popular cities in record time. Reaching speeds of up to 350 km/h, the AVE train covers the distance between Madrid and Barcelona in just 2 hours and 30 minutes.

The least expensive option offers variable prices depending on time of booking and travel. Ticket exchanges or refunds are not permitted.

Slightly more expensive than the Promo fare, and also offering variable prices depending on time of booking and travel. Refunds are permitted up to 1 day before departure, where a cancellation fee applies.

The base fare is not discounted, and also offers variable prices depending on time of booking and travel. Refunds are permitted up to 1 day before departure, where a cancellation fee applies.

Standard class with trolley service when available or you can visit the cafeteria car.

Standard class with more spacious seats than Turista and trolley service when available or you can visit the cafeteria car.

First class with more spacious seats and catering served at your seat.

Discover five of the most popular Spanish cities on a single trip with this suggested route.

Services on the AVE 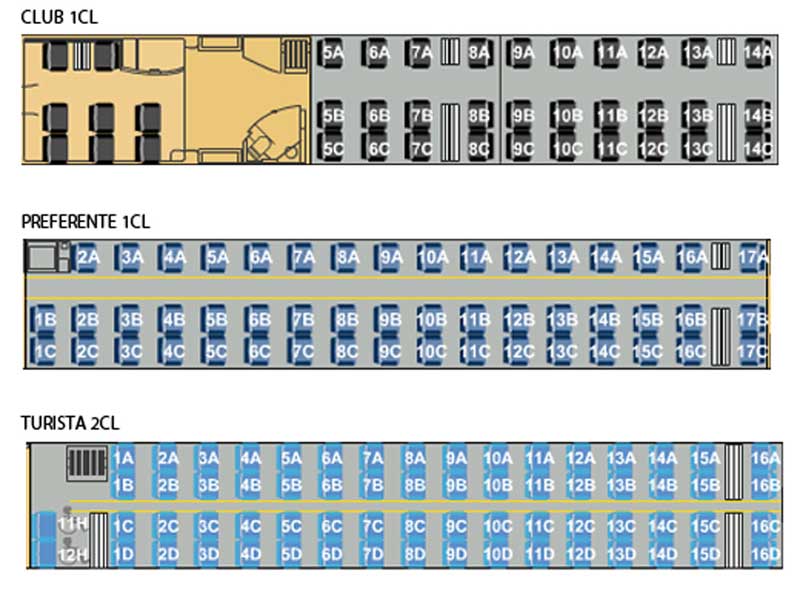 Bicycles are not allowed on AVE trains, even in a bike bag. If you need to travel with your bicycle, you will have to take an alternative train such as a night train, regular or regional trains that do carry bikes.

If you’re traveling with a pet, keep in mind that you will need a reservation for your pet. Reservations for animals must be made locally, prior to travel. You can carry small animals in a container no larger than 60x35x35cm. The container cannot exceed 6kg in weight.

AVE trains include space and facilities for travelers with reduced mobility and special needs. Wheelchairs with maximum dimensions of 70cm wide, 130 cm long and 140 cm tall are allowed on board. Larger chairs are only accepted if they can be folded and the passenger is able to use a regular seat on the train. Ramps are available on AVE trains in order to help passengers to board and to get off the train. If you require assistance for traveling on the train, it is advisable to arrive to the train station at least half an hour prior to departure. For more information, you can contact Renfe at this local phone number (+34) 90 224 05 05.

Rail Passes for Travel in Spain

The Alhambra (Granada)
One of the most visited attractions in Spain, The Alhambra, is a thousand-year-old complex known for the amazing Arab-Islamic architectures of its Fortress, Palaces and gardens built by the Nasrid sultans. More

La Concha (San Sebastian)
Located in San Sebatian, La Concha is unique for its one and a half kilometres of white sand in a urban setting. The in-city beach is among the best in Europe.

Alkazar (Seville)
A World Heritage site, this palace is 11 centuries old and has lots to discover. From Alhambra-inspired tile and plasterwork, carved ceilings, open courtyards, gardens fit for a king, these are palace grounds you’ll be happy to get lost in. More

El Encierro (Pamplona)
El Encierro (the Running of the Bulls) is a staple event of San Fermin’s festival where people compete by running away from a small group of bulls that have been let loose in the streets.

Palacio Real (Madrid)
Madrid’s Royal Palace is the official residence of the King of Spain. It is now only used for state ceremony and opened for tours and visits.