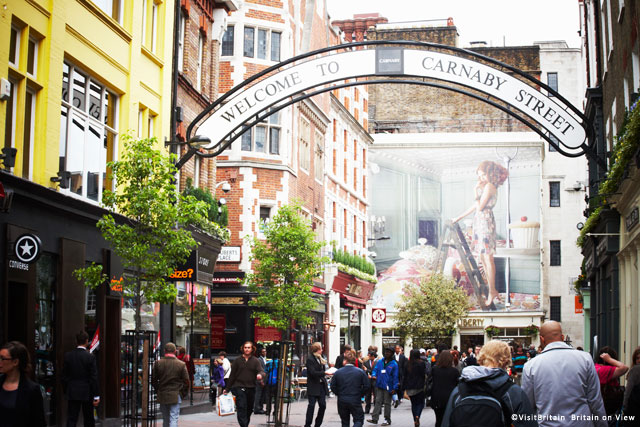 The West End is comprised of some of the most upscale and finest retail streets in the world! This is where Regent St., Bond St., Oxford St., and St Christopher’s Place are the popular shopping destinations and extravagant abodes to top of the line Designer Boutiques, fashion shops, department stores and chain stores. Soho is also a district of the West End with many pedestrian shopping streets offering anything from vintage and vinyl to local designer and independent fashion boutiques.

Here is a list of some of the West End’s main shopping streets and what they have to offer you:

Bond Street is a fine example of a city’s designer boutique mecca; from Chanel and Dior to Burberry, Hermes and Tiffany’s, this street is a fashionista’s paradise. It is comprised of two sections: Old Bond St. (Southern section) and New Bond Street (Northern section) and has been an upscale retail haven since the 18th Century when Sir. Thomas Bond developed it for the upper class socialites and big-spenders.

Oxford Street is where Britain’s first department stores were built (i.e.: Selfridges) and is located next to Oxford Circus and Bond Street tube stations. This street is so popular and such a strong competitor against other higher end retail streets or shopping centres due to its large variety of shops and cutting edge prices.

Regent Street is famous for its spectacular Christmas lights display during the holiday season which is where Harmleys, the largest toy store in the world, happens to be located. It is also where you can find the BBC headquarters, The Apple Store and many different international fashion boutiques.

Carnaby Street is part of the district of Soho and has many independent fashion boutiques and variety stores. It used to be the centre of mod fashion in the 60’s and has still kept its unique appeal. It is now also considered a foodie destination with Kingly Court (a 3-story dinning complex with 21 food concepts to experience) among its ranks.

Berwick Street has an eclectic mix of vintage clothing stores and vinyl shops, tailors and textile stores, traditional pubs, cafés and restos. This street used to be known as the “Golden Mile of Vinyl” since it is London’s centre for independent record stores (i.e. Reckless Records and Sister Ray) therefore becoming a destination for vinyl collectors. It is also home to the famous Berwick Street Market which was started in the 18th Century and offers an array of fruits and veggies, flowers and sought after street food.

The West End will entice all who seek it!