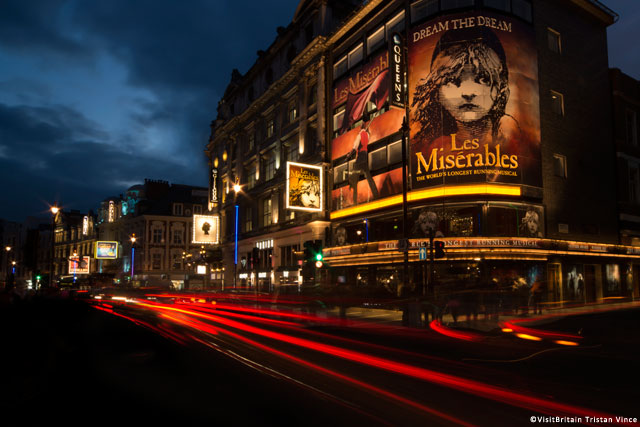 One thing that is a ‘must-do’ while visiting London is seeing British culture come to life by going to a musical or a play in one of the West End Theatres.  My favorites are:

The Phantom of the Opera, a Gothic-romantic tragedy musical composed by Andrew Lloyd Webber which plays at Her Majesty’s Theatre-an original Victorian theatre.

Les Miserables, a mind-blowing musical written by Claude-Michel Schönberg and Herbert Kretzmer, based on Victor Hugo’s 1862 novel and playing at Queens Theatre.

The Mousetrap, a clever mystery/whodunit play written by the wonderful Agatha Christie and the longest running show in the world since 1952, playing at The St Martins Theatre.

Every time I go to London, I feel my trip wouldn’t be complete without paying a visit to Theatreland and seeing a show!

The Theatre District/Theatreland is one of the hearts that pulses through London and contains the highest caliber of theatre in the English speaking world. Home to about 40 theatres, the Theatre District is a large area located in the West End. The main street for theater-goers is Shaftesbury Avenue Though there are many theatres scattered around the area on different streets.

The sector is easily accessible by bus (No. 38) or tube, being next to Piccadilly Circus station, Oxford Circus station, Covent Garden station and Leicester Square station.

Though it gets quite crowded, especially on weekends, the hustle and bustle and theatre rushers add to Theatreland’s exciting atmosphere!
Typically, before an evening show, people go for a pre-theater dinner at one of the area’s delicious restaurants which offer a pre-theatre menu. These are a great deal since you can get a 2-3 course meal for only £15-£30! Some examples of these restaurants are Clos Maggiore, Asia de Cuba and Boyd’s Brasserie.