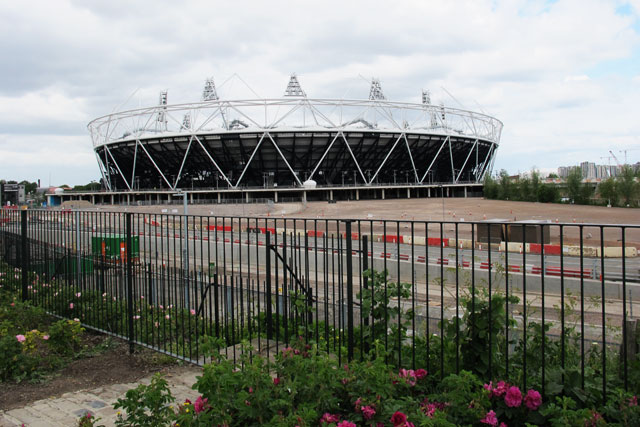 Day 2 – Up early and on our way to drop off our luggage at London Euston’s ‘Left Luggage’ counter, where travelers can check in their bags for the day or longer.  Then we hopped back on the tube to meet up with our Blue Badge tour guide for a walk around the 2012 Olympic park.  The tour took us along the River Lea toward the area of West Ham, where we walked along the path towards views of the Olympic stadium and many other projects under construction with exciting plans for next summer. The tour took approximately two hours and is offered daily for 9 GBP per person at www.tourguides2012.co.uk.

After the tour we took the occasion of being in the area to ride the South Eastern high speed train (a.k.a the Javelin) from Stratford International to St. Pancras station, which is also adjacent to King’s Cross train station. 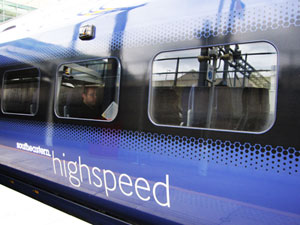 This new train service will be one of the main means of transport for the expected 200,000+ daily visitors to the 2012 Games.  The 6 minute journey reaches speeds of 225km/h, costs about 6 GBP one way and departs every 15 minutes.

With a beautiful London afternoon ahead of us we made our way to Camden Market, which is packed on Sundays.  With 100’s of stalls selling clothing, souvenirs, jewelery and all kinds of street food – think Thai, Chinese, Indian food – we got a taste of one of London’s local high energy hangouts.

With lunch on the go we were ready to seek out some other areas of London; which we most certainly did! From Piccadilly Circus, along Regent St., to Soho, China Town and the theater district, we explored and window shopped until it was time to board ScotRail’s Caledonian Sleeper service from London Euston, departing at 11:30pm.  With our eyes set on waking up in Scotland, stay tuned for day 3…

For more information on planning your trip: Visit Britain.

Jen’s highlight of the day: exploring the different London districts – her favorite being Soho.

Angela’s highlight of the day: the window shop displays – a collection of our favorites to come!