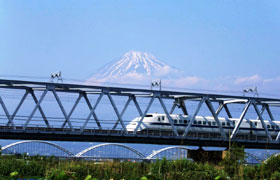 Includes travel on ‘bullet’ trains & all

The Japan Rail Pass offers great value! It’s an economical way to travel throughout Japan’s extensive rail network, considered to be one of the most efficient in the world. This includes travel aboard the world famous Shinkansen ‘bullet’ trains, limited expresses and local services.

Select your Japan Rail Pass among the following validities; 7, 14 or 21 consecutive days. In Japan, first class is called Green Class and standard class is called Ordinary Class. Available discounts include, kids between the ages of 6-11, pay approximately half the adult fare. Also kids under the age of 6 travel free, if not occupying a seat and accompanied by an adult Japan Rail Pass holder.

Another rail pass offered by ACP Rail for travel in Japan is the East Japan Rail Pass and until November 14th, 2010, you can get a special 3 day pass, while realizing great value in Japan this Autumn.

A 3 day Japan Rail East Pass Special Offer is available to overseas visitors for travel between September 1st and November 30th, 2010*, with fares available for adults and children in Ordinary (standard) class. With the JR East Pass Special Offer, passengers will enjoy great savings and a shorter pass validity of 3 flexible travel days, within a 10-day period starting from the first day of use.