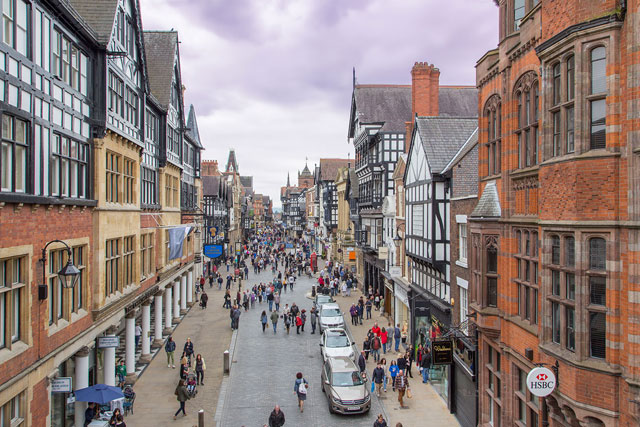 Chester is the perfect mix of old and new. It features incredible treasures that came together throughout its 2,000 years of history. From the 2-mile long Roman red-brick wall, the medieval cathedral, the galleried rows, the Elizabethan half-timbered houses to the spectacular shopping opportunities, Chester is one of the must see cities in England.

Chester is very much accessible by train. We arrived from Lllangollen in Wales and followed to Cotswolds. In all honesty, I don’t think we would like to travel thought the UK any other way than by train. The scenery was impressive to say the least. And the use of the BritRail Pass made rail travel incredibly easy and flexible. We thoroughly enjoyed the freedom and comfort that came with it.

Chester’s roots date back to Roman times, but the Vikings, Danes, Saxons, Scots and Normans also occupied it at various times. By far the greatest influence on the city, however, was its maritime trade from the 12th to 14th centuries, when the city prospered and flourished.

Chester is one of the most beautiful historic cities in England. It is best remembered by visitors for the black & white Tudor-style timbered buildings, but it actually boasts a vast array of historic monuments.

The Eastgate Clock is the city’s landmark, and a very popular photo stop. Erected on top of a stone archway, it was built to commemorate Queen Victoria’s Diamond Jubilee back in 1897.

The Eastgate Clock is actually accessible from the City Walls that are made mostly of red sandstone. The complete circuit of the roman walls is an excellent two-mile walk, taking in the four main gates, and impressive watchtowers and water towers.

Off the walls, the Chester Roman Amphitheatre is the largest in Britain. Two thousand years ago it was used for entertainment and military training. Nowadays anyone can take a pleasant walk through the ruins and perfectly manicured lawn, relax and meditate at the passing of time.

Another not-to-be-missed spot are the famous Wishing Steps. It is said that anyone capable of running up and down twice without drawing breath will see their wishes fulfilled. While not a superstitious person, I personally believe it can’t hurt to try your luck.

Among Chester’s most distinctive features are the Tudor Rows, with a wealth of boutique shopping opportunities running the length of the stone and half-timbered buildings. They were created in the 14th century from houses and shops built on top of rubble left from the Roman ruins and are the Promised Land for any shopaholic.

Last but not least, Chester Cathedral is well worth an hour of your time. It was built on the site of a church dating back to 10th century and a Benedictine abbey, and it has a rich and fascinating heritage. It became a cathedral after Henry VIII dissolved the monastery built on this site. Nowadays it has an excellent choir and it prides itself for Handel’s Messiah having been first rehearsed here.