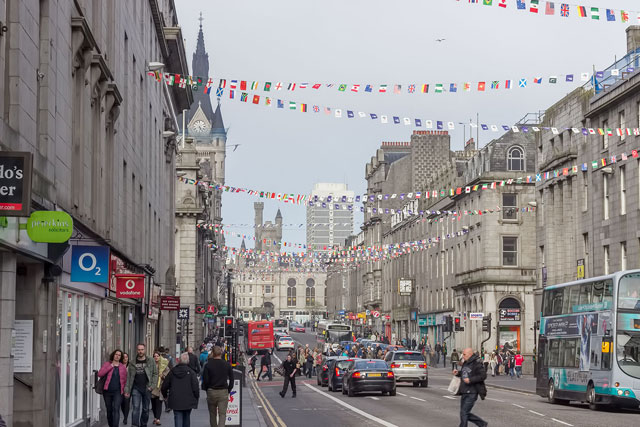 It was actually the fairy-tale like turrets and dreamy spires of Aberdeen that called our attention in the very first place. But Aberdeen is not called the Silver City with the Golden Sands for nothing. Its coastline is equally impressive and well worth a stroll as well.

After exploring Edinburgh for just over a week, our first train ride through Scotland was to Aberdeen. Scotland is gorgeous and it has a great rail system that makes train travel really easy, fast and comfortable.

BritRail offers an incredibly handy 8-Day Flexi Pass valid all around the UK over a period of two months. Their pass does not only offer great value for money, but it is also a romantic experience – Traveling first class is quite posh. The views are simply amazing. And they even serve you delicious complimentary food and drinks at your seat.

Since the 1970s when the extraction of the North Sea oil started, Aberdeen was nicknamed the Oil Capital of Europe. It is said the recent economic crisis did not even touch Aberdeen.

A visit to the award-winning Maritime Museum proved to be quite interesting. The fairly new museum by the harbor tells stories of hardship, suffering and work off shores. Aberdeen has been associated with the sea for centuries and this is an incursion into the long maritime history of the city and the oil drilling industry. Apart from the entertaining exhibits, all the information on display is quite educative and can be fun at any age.

One interesting fact that really stuck with us was the comparison between the poverty level in Scotland (drawn somewhere just above 1,000GBP per month) and an African country (were the poverty lever is at 5GBP per month). Aberdeen postcode has the second highest number of millionaires of any postcode in the UK and this is in part due to the oil industry.

A stroll through the city reveals a grey architecture, with buildings made mainly from granite from the nearby quarries. Nevertheless, in spite its color, the city looks like from a fairy tale, with many pretty turrets that would make any princess envious.

But one cannot leave Aberdeen without taking a stroll through Footdee or Fittie, as the locals affectionately call it. The old fishing village at the east end of the harbor is as quaint as it gets. The area has been inhabited since the medieval times and it is nowadays protected from irrational development. Footdee is quiet and cute, the locals taking great care in keeping the area tidy and decorated with personal objects. It’s like stepping into a different world, just minutes away from the hassle and bustle of the city.

Just by the Fittie, the prettiest of beaches is to be found as well. Quiet, with smooth, golden sands, the beach is sprinkled with large stones and offers a delightful playground for kids, dogs and seagulls.

If you are lucky, you will also have the chance to make acquaintance with the haar, a very interesting weather phenomenon, a coastal fog typically formed over the sea and brought to land by wind advection. No wonder some of the best ghost stories originate in Scotland!

The area to the west of Aberdeen, stretching as far as Braemar, is not known as ‘Royal Deeside’ for nothing. Castle hopping is one of the favorite activities to do in this part of the world, even more so since some of the castles can be easily reached by train. One of the most charming of these castles is Dunnottar, a mere 20 minutes away, on the Edinburgh to Aberdeen train line.