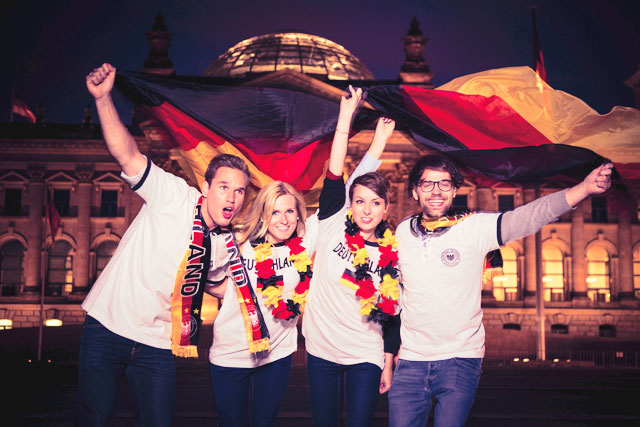 How fans around the globe follow the World Cup

Maybe it’s the drama of witnessing the best of proud nations laying it all on the line or maybe it’s the excitement of being part of a passionate crowd cheering in the stands and screaming from the top of their lungs. It could also be about feeling the palpable tension on the field as the clock closes in on its 90th minute or the sight of colorful celebrations and jaw dropping plays realized by super athletes. No matter what it may be, something about the game of football (soccer as it is known in North America) manages to connect with fans around the globe. As we’re only a few days away from the biggest sports tournament in the world, let’s take a look at how the World Cup is followed in various nations.

When it comes to football in England, the best way to watch the games and get immersed in the culture is to head to a local Pub. More so than anywhere else, British Pubs are at the centre of community life. People go there to socialize with both friends and strangers, making pubs somewhat warm, welcoming and pretty much the ultimate gathering places to enjoy big games, celebrate a victory or mourn after a loss.

Fans of the “Three Lions” should consider a BritRail Pass to travel by train across England to visit Pubs. In addition, the BritRail Pass allows you to travel in Scotland and Wales, where Pub dwellers surely won’t be as sympathetic to the English national team.

During the World Cup, the place to be in Germany is at the Fan Mile in Berlin. Streets are closed between the Brandenburg Gate and the Victory Column to allow for several hundreds of thousands of fans to watch the games together on giant screens. In addition, the further into the tournament “Die Mannschaft” goes, the more electric the atmosphere is bound to become.

Germany is best discovered by rail with a German Rail Pass which offers unlimited travel between Berlin, Munich, Frankfurt and other popular destinations.

Once again among the favorites to win it all, the Spanish team will definitely bring it’s A game on to the field. Back home however, what fans will bring is their infectious devotion to their team. Not only do fans dress up in the colors of the national team, they also adorn typical Spanish costumes. For instance, you’ll meet bullfighters, flamenco dancers, etc.  Not to be missed are the antics of drummer Manolo El del Bombo, a local legend known as one of Spain’s zaniest fans.

Go on a quest to find the best fan costumes! The Renfe Spain Pass is valid for travel across Spain to destinations such as Madrid, Valencia, Seville, Barcelona and more.

Making its triumphant return, Belgium is gearing up for the World Cup by placing screens in many city squares. Furthermore, t-shirts, hats and all sorts of gear and gadgets related to the “Red Devils” are selling like hot cakes these days.  Needless to say, stepping out of their neighboring country’s bright orange shadow is the one thing everyone is talking about, while they enjoy the local brewers’ Red Devils beer especially on sale throughout the World Cup season!

With a single pass you can catch the games from the perspective of the fans of Belgium’s Red Devils or perennial rivals, Netherland’s Clockwork Orange. The Eurail Benelux Pass can be used on trains in Belgium, the Netherlands and Luxembourg.