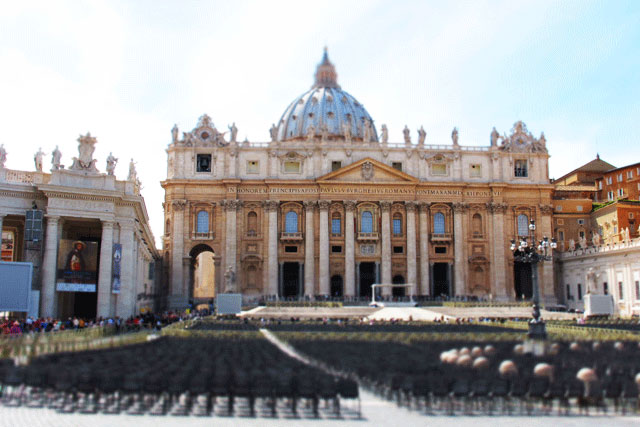 Between Christmas, New Year’s Eve and Epiphany, there is a lot going on in Rome during the winter months. The city is arguably the capital of Christianity and, as such, finely ties in the different holidays to their religious roots. Around Christmas, the main type of decorations you’ll encounter is the presepe – the creche or nativity scene. You’ll practically find one in every church, square, and shop. The most elaborate presepi can be found in places such as Piazza del Popolo, where hundreds of nativity scenes are on display, and Piazza Navona, which becomes a Christmas market for the season and features a life-size nativity scene.

In addition to what takes place in the city itself, one advantage of being in Rome for Christmas is that you can easily participate in the activities in Vatican City. Hallmarks of those celebrations include the Pope’s midnight mass on Christmas Eve, a huge Christmas tree in St Peter’s Square and the life-size nativity scene in front of the basilica.

Then it’s on to New Year’s Eve celebrations in Rome with La Festa di San Silvestro. On December 31, families and friends gather for a huge dinner that traditionally includes lentils and Zampone, a type of pork sausages. The meal is meant to symbolize good fortune for the upcoming year and it also energizes you for what’s next. People gather in public squares to dance, drink and ring in the New Year. The party lasts throughout the night with people retiring to bed only in the morning of Il Capodanno, New Year’s Day.

The end of the holiday season officially falls on January 6, during Epiphany. This holiday commemorates the day Three Wise Men brought gifts for Baby Jesus, according to Catholic traditions. Hundreds of people replicate this event by dressing up in medieval costumes and walking up to the Vatican, carrying gifts for the Pope who welcomes them with a morning mass. The more secular tradition on January 6 is that of La Befana, an ugly witch who fills Christmas stockings with sweets for good children and coal for bad children. Many people also use this date for gift exchange instead of December 25, so don’t be disappointed if by Christmas day your host has not placed a wrapped box bearing your name under the tree.

Travel by train to Rome and other cities in Italy, where you can expect to experience new holiday traditions. Trenitalia train tickets can be purchased for travel between any domestic destination and are conveniently available as e-tickets.