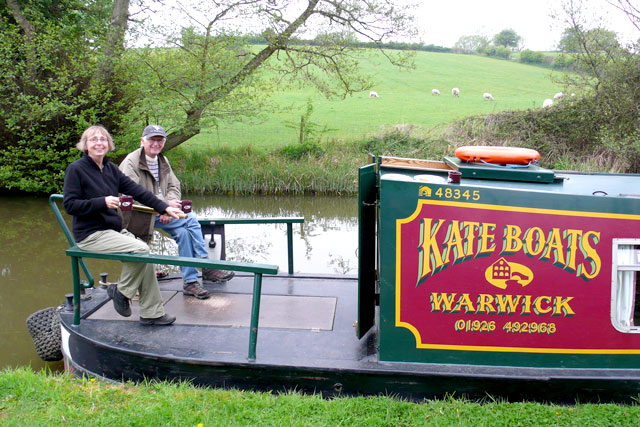 We’re rolling along in our First Class coach from Penzance to Leamington Spa in the Cotswolds, and the four of us can’t stop smiling.  Hurray – we made the absolutely perfect decision on how to get around England.  You’d think we’d be immersed in our free newspapers, taking advantage of the train’s courtesy WIFI to check emails, and savouring our complementary meals and drinks, but we can’t take our eyes off the passing scene. It’s all ….”Look at that white horse outlined on the hill!,” “Did you see those adorable little lambs?” “That’s not a castle, is it?” “Wow, check out that British pub!”

When researching travel, the BritRail pass was the first thing we looked at. We had fond memories of previous student travel on the 7 and 15-day passes, but were delighted to see that they, too, had grown up. The new Flexi Passes meant we could fine-tune them to exactly fit our needs, choosing only the areas we wanted to travel to and the exact number of days we needed. Ergo, we ordered four day BritRail England Flexi Passes. That covered our initial trip from Gatwick to Penzance, from Penzance to Leamington Spa, then a third day from Leamington Spa to London, and finally from London back to Gatwick.  No worries about reserving, as First Class was rarely busy; no worries about buying tickets in advance or catching specific trains; and a reasonable price. Now freed from those worries, we could concentrate on our next adventure – a three-week canal boating trip exploring the Stratford Canal and then chugging around the Warwickshire Ring.

The friendly folk at Kate Boats at Stockton Top Lock were waiting to show us the ropes and had kindly done our food shopping for us, so we were freed up to focus totally on familiarizing ourselves with Florence Edith, our 56’ narrowboat, and then be on our way to chug through 11 locks before nightfall. After showing us through the boat, John threw his bicycle on the roof and took us through our first lock, just 5 minutes away.

Happily, there we joined another boat in the double locks, so knowing we were in good hands for the rest of the ‘staircase’ John said farewell, cycling home along the towpath. We’d lucked out meeting up with the cheery all-male crew from our neighbouring boat, who were more than happy to do way more than their share of winding and unwinding and opening and closing of lock gates. That night, more toasts. The holiday was unfolding as it should. First class all the way.

With 19,000 daily train departures to figure out, it’s really handy to have a pass that cuts through the confusion. Thanks to the good decisions we made about getting around the country, the rest of the trip was clearly not going to go off the rails either, a pun I know, but if the wheel fits…..

Cherie Thiessen, www.cthiessen.com is a Canadian-based travel writer and travel writing instructor who provides soft adventure for seniors–focused travel stories for websites, newspapers and magazines. She’s a member of the professional national travel writers’ organization, Travel Media Association of Canada, as well as the B.C. Assoc. of Travel Writers.  Her press trips have taken her to Australia, New Zealand, the Falklands, South America, the Galapagos, Europe and Africa.