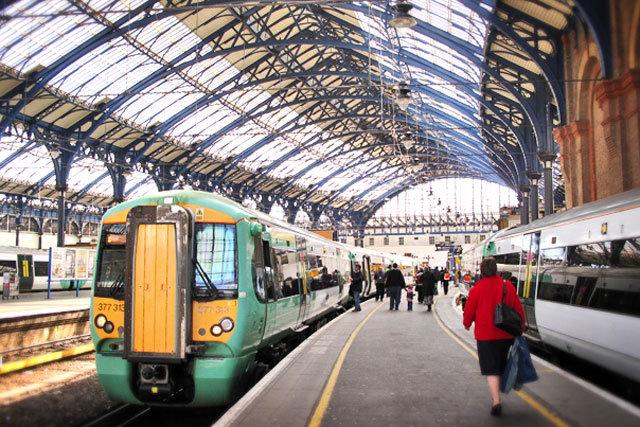 I met my love on a train.

Bear with me – I’m not about to rehash the plot of Before Sunrise, the film that inspired many a mid-nineties traveller to ride the rails in search of their own euro-fling.

You see, this love of mine isn’t human, it’s geographical.

Rolling green, pillowy hills flanked the train as we whooshed through the English countryside. A disembodied voice, her accent as rounded and elegant as the landscape, came through the speakers: “we are now approaching Lewes.”

I had no idea at the time, but I was about to receive a mental tattoo that would transform my life.

When I stepped out of the charming Victorian station, the ordinary world vanished. In its stead stood an enchanted landscape that rocked my little Canadian soul.

To my left was a small Norman castle jutting out of a cluster of heritage buildings. Before me, steep Station Street with its wee sidewalk nestling against two pubs. And to my right: a dramatic chalk cliff capped with a toupee of verdant grass.

That was seven years ago. Since then, I’ve travelled back to England a dozen times, spending a total of 21 months exploring its thatched cottages and barstools. I’ve met characters (usually on said barstools) who have inspired me, changed me and mercilessly made fun of me (it’s called ‘taking the piss’ and it’s a national sport). I’ve visited ancient places that have given me perspective on this bizarre mystery called “life.” I’ve curtsied for Prince Philip at Buckingham Palace – for real, and it was hella awkward.

Always, the train is my trusty steed.

When someone informs me that they’re travelling to England, I immediately perk up as though injected with fifteen ventis all at once and excitedly bleat: “where?” If the answer is “just London,” I am forced to don my disapproving schoolmarm face and deliver a stern lecture.

London is a marvel, a towering layer cake of tasty history. As Dr. Johnson said: “when a man is tired of London, he is tired of life.” But you haven’t really been to England until you’ve:

a) counted 100 sheep within an hour

b) gotten spectacularly lost on a footpath

c) had the luxury of walking for three blocks without encountering a Boots, a Pret-a-Manger, or someone selling “The Big Issue.”

In other words, I’m begging you – for your own good, naturally – to venture into the country and the smaller towns. And you can do that by train.

The train system in England is a dream. As a Canadian, it’s hard to grasp just how efficiently the train will get you where you need to go, when you need to get there.

I’ve only driven “on the other side” once, and my knuckles weren’t just white, they were practically transparent. Oh, and I smashed into a stone wall – that was hella awkward, too.

A train ride, on the other hand, is relaxing and informative. Load your iPod with tunes selected especially for your trip and watch the show go by outside your window. Music is a powerful emotional souvenir – I can’t tell you how many songs evoke fond memories of train trips.

To take a trip to the next level of ease, a rail pass is ideal. I recently used an 8-Day BritRail FlexiPass to get around Shropshire, Somerset, Devon and Cornwall and my travel days were as laid-back as a stint at the spa, only without the massage oil and the nudity.