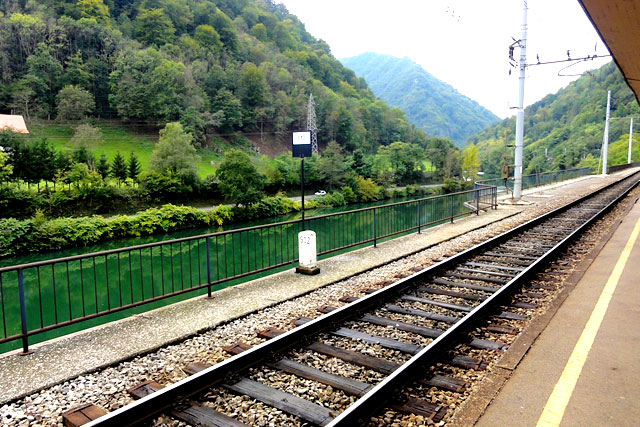 Full-time travellers and podcasters Craig and Linda Martin had the chance to travel with a Eurail Global Pass from ACPRail.com. Here’s what they got up to on the first half of “IndieRail” — an independent train adventure through Europe.

Linda and I had been planning for months. Trains, timetables, cities, sights, budgets… Summer in the Spanish city of A Coruña was certainly busy, but now the time had come. Our Eurail Passes from ACPRail.com had arrived, and we were ready to roll on a three-month adventure: Europe by train.

We started our trip in amazing north Portugal, and travelled south by bus before jumping on a plane from Faro to Düsseldorf. It was here, in Germany, that we checked that our passes were activated, and got on the first of many, many trains.

We had arrived at the station early, wrapped up in jackets and scarves against the cold of an autumn morning. The information centre was easy to find, and the friendly service agent took our passes and looked at them twice. “They’re already activated,” she said. Of course! We had asked ACPRail.com to do that for us before they were posted. She stamped them for us anyway — all travellers like stamps, right? — and we made our way up to the platform.

As the train accelerated towards Berlin, we settled into the quiet first-class cabin: this was it! The first train trip of IndieRail!

After several fantastic days in Berlin, we headed to Prague, with its fairy-tale cobbled streets, high-walled castle, and Art Nouveau architecture.

We wanted to get to Vienna next. The direct train is fast and reasonably priced, but since the Eurail Pass allowed us to catch any train at no extra cost, we decided to get a bit creative. Why take a direct train when we could have an adventure? First was a rickety, rackety journey from Prague to Pilsen, the home of Pilsner beer. We rushed from the train with an hour and half until the next one was due to leave: there must be time for a beer in a local pub. Instead, we found ourselves in the brewery restaurant itself, just a few hundred meters from the train station, eating smoked ham and downing a quiet stein.

Having completed this pilgrimage, we jogged back to the station where a slightly smoother ride brought us into Austria. We disembarked at Linz, and headed to a friend’s house for dinner: dumplings, Almdudler, strudel… it was a very Austrian meal. But, too soon, it was back to the train station, and we sunk into the soft seats of a private compartment for the last few hours to Vienna. Four cities, one day, exhaustion.

Vienna was great fun but, after a couple of days, it was time to continue southward to Maribor — one of Europe’s Capitals of Culture for 2012. We enjoyed good company, great wine, and green beer!

So far, we had been travelling inside the Schengen zone, the group of European countries that have open border agreements. As the train slowed down and stopped at the border to Croatia, we suddenly realised: we were passing out of Schengen! We didn’t need a visa, did we? Apparently not, as our passports were stamped by a mustachioed man who barely gave us a second glance. It always feels like a long wait as border agents and customs officers make their way through the train carriages, but sitting on a comfortable train seat through border control is much more civilised than standing in a long post-flight queue, that’s for sure.

After a great time in Zagreb, it was on to Bohinj in Slovenia. You’ve probably heard of Bled? This is its less touristy little brother, also located by a stunning lake. We were plagued by bad weather during our two nights there, but the beauty of the area shone through the rain.

Leaving Slovenia was a little tricky, as there are no trains across the border with Italy during the day. Apparently there’s one at night, but that wasn’t going to work for us — so we caught a train to Nova Gorica and walked across the border to its sister town, Gorizia. From there, we had to catch a bus to Gorizia train station, where we could continue our journey on to Padova — with a quick stop for pizza in Udine.

Italy’s regional trains are cheap (and slow) making for great day-trip opportunities without burning a whole day on your pass. Our half-day in Venice, for example, cost €7 each for a return trip from Padova, and took just less than an hour each way. This wasn’t the first-class comfort you might receive on the intercity trains, but it was comfortable enough — and it’s all worthwhile when you hit the coast and pass over a narrow bridge to the canal-side station: you’re in Venice!

At this point we had passed through eight countries and had a feel for the trains. In Germany and Austria they were fast and comfortable, and the Eurail Passes meant we had access to first-class cabins with wide, comfortable seats, power plugs for our laptops, and easy access to the dining car. In the Czech Republic, Slovenia and Croatia the quality of cabin and track deteriorated a little: this was a slower, rougher train experience.

Travelling by Eurail gave us the ability to make last-minute decisions on what to do, go hundreds of extra kilometers without extra costs, and almost always on the uncrowded comfort of first-class train carriages.We were five weeks into our trip, and we had just entered Italy… but I’ll have to tell you about that next time.

Stay tuned for more IndieRail adventures from Craig and Linda with visits to Italy, Spain and the micro-nations: San Marino, Monaco and Andorra.