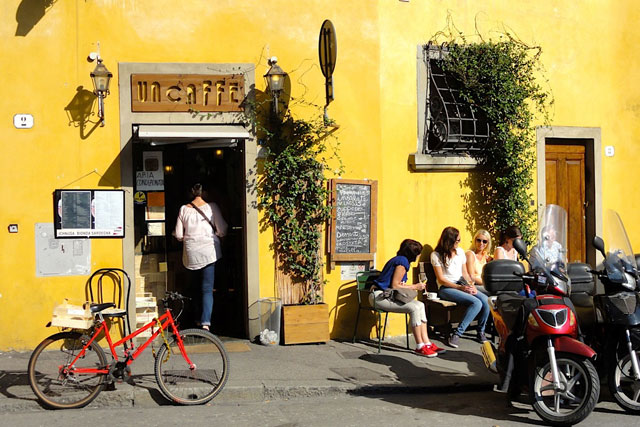 Full-time travellers and podcasters Craig and Linda Martin had the chance to travel with a Eurail Global Pass from ACPRail.com. Here’s what they got up to on the second half of “IndieRail” an independent train adventure through Europe… Into Italy and Spain, while passing through San Marino, Andorra, Monaco, Nice… finishing up just a little past the Alhambra.

Read about the beginning of their trip — Portugal, Germany, Austria, Slovenia and Croatia — right here.

Although Italy’s trains aren’t necessarily the most speedy or reliable, rail’s a great way to get around this skinny nation. Distances can be long, making an overnight trip a possibility — and if you’re travelling from Sicily to the mainland, you can have the odd experience of the train driving right onto the ferry.

During our IndieRail trip, we didn’t have any marathon trips through Italy; instead we kept to the north and made sure to hop on and off the train as much as possible — one of the great things about a Eurail pass is that you can change your plans at the last minute and it doesn’t cost you anything extra. We travelled from the Slovenian border down to Padova, where we based ourselves for a few days and made a side trip to Venice — since it’s only €3.50 each way, it wasn’t worth using the pass.

Too soon, our time in Padova was up and we had to make our way to our first new country of the year – tiny San Marino. We filled in another travel day on the pass — double-checking the date before writing it in, because if you make a mistake you’ll lose a travel day. Since we had to change trains in Bologna anyway, we took the opportunity to see a bit of the city — and they don’t call it “the red city” for nothing! Then it was on to Rimini, where we caught a bus to San Marino — sadly, no trains have run there since the lines were destroyed in World War Two.

After a couple of pleasant days, we headed back into Italy — destination Florence. We retraced our tracks to Bologna then had to change at a small town called Faenza, where the food in the station cafeteria wasn’t awesome — who’d have thought there’d be bad food in Italy? Florence made up for that disappointment, though, it’s an amazingly beautiful city, with good food like some delicious salami and crostini to match.

One of our main aims on the IndieRail trip was to visit the micro nations of San Marino, Monaco, and Andorra — but we couldn’t find a bed in our price range anywhere in Monaco! Instead, we inserted a quick stop in Nice, France — which we managed to fall in love with. This was a bit of an inconvenience, since we had a train to catch — our one overnight journey of the trip with couchette beds booked in advance by the team at ACPRail.com.

We arrived unnecessarily early, then stood around the station waiting for our train. There’s little seating in the Nice station, that’s for sure! When we boarded and found our cabin, we groaned as we scanned the information above the door: two other passengers were joining us at the last possible stop. We had wanted to be asleep by then! The cabin was large enough to move around comfortably, and having the two top bunks, we could store our bags easily. Eventually the two other passengers embarked… but there were three people, not two. A few moments of confusion — our French not up to the task — and they were dispatched to another cabin. We settled down until the morning, and an icey change of train towards Andorra.

On arrival at the French/Andorra border town of L’Hospitalet, we had to race for a seat on one of the few buses that connect the two countries — but, as it was run by the French rail network, our Eurail passes were accepted as tickets and we didn’t have to pay anything!

Once again, we were leaving the Schengen zone, so passports were checked and we were in! This was the last country in continental western Europe we hadn’t visited, so I wish it wasn’t seven degrees centigrade below zero with knee deep snow as we disembarked. It was a long travel ‘day’, but worth it for the amazing views and friendly people.

We left Andorra by bus, as there was a direct one to our next destination (Barcelona) and the same journey by train would have been almost impossibly difficult.

Stayed tuned to read more about our adventures in Spain.