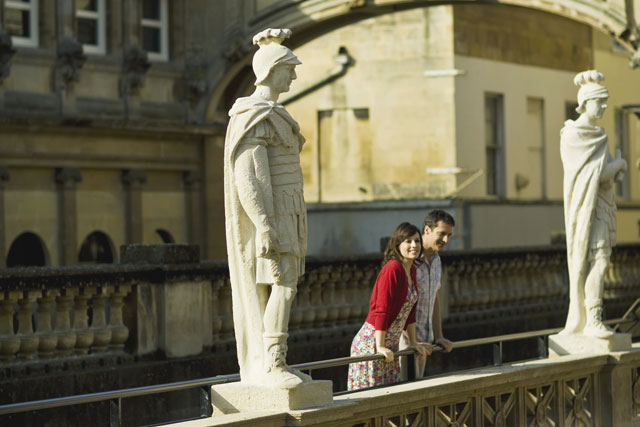 It’s comforting to know that there are some places in the world where you can return after a five, ten or even twenty year absence and find that very little has changed. I first visited Bath in my early 20s, a college graduate with a degree in English and visions of Jane Austen dancing in my head (it was only years later that I discovered Jane – who wrote so eloquently of it – didn’t much care for Bath.)

She must be the only one. Three subsequent visits have left me just as enamored of this UNESCO World Heritage city in the southwest of England as I was on that first visit. On my most recent trip this past October, I left London’s Paddington Station using my BritRail FlexiPass, which I have found invaluable on my many trips to the U.K. I settled back in a cozy First Class Compartment and prepared for a relaxing two-hour journey.

There’s a reason why Bath is one of the most visited destinations in England, with its mix of Roman and Regency influences. Jane Austen may have introduced Bath to the international reading public, but it was the ancient Romans who gave it its raison d’être.

Legend says the famous baths were discovered in the 9th century B.C. by Prince Bladud, father of King Lear, who was exiled from the royal court because of his leprosy. After bathing in the area’s mineral rich waters, his skin lesions vanished. True or not, it makes an entertaining story and adds to Bath’s lore.

What is known is that it was the Romans, who arrived as a conquering legion in 43 A.D., who raised “taking the waters” to an art form. Given the name Aquae Sulis, the baths were not just a source of healing water to the Romans, but a sacred place where they went to commune with the deities of the underworld.

The largest pool is the Minerva Bath, but many bathers prefer the roof terrace pool of the luxurious Thermae Bath Spa (www.thermaebathspa.com.) Here, through thin veils of mist rising from the water, they have spectacular views of the town spires and emerald green countryside beyond.

After the Romans departed in 410 A.D., it took another 1,300 years for Bath to again become fashionable. During the Regency period, aristocrats and hangers-on alike followed the Prince Regent (later George IV) here to indulge in all manner of fun and frolic.

The neo-classical Pump Room, just across from the Baths and completed in 1799, quickly became the social heart of the city. Today, the elegant dining room is a popular place to enjoy afternoon high tea.

Not far from the Pump Room is magnificent Bath Abbey. Founded in the 7th century as a Benedictine monastery, it has undergone several renovations and is now considered one of the best examples of the Perpendicular Gothic style of architecture in the west of England.

If the Romans were responsible for the namesake baths, the Regency Period saw the construction of Bath’s other iconic site – the Royal Crescent. This semi-circular street of 30 elegant terraced houses is considered one of the best remaining examples of Georgian architecture in Britain. The 5-star Royal Crescent Hotel is located at Number 16.

Another legacy of the Regency era is picturesque Pulteney Bridge spanning the River Avon. Designed by Robert Adam in 1769, the Italianate bridge is lined with shops and restaurants in the manner of Florence’s Ponte Vecchio.

The stretch of river near the bridge is one of the most scenic, with a terraced weir and bankside gardens bursting with blooms in every season.

Indeed, one of the pleasures of a trip to Bath is to wander aimlessly, with no particular destination in mind. That way, you’ll be free to discover the rich treasures the city has to offer.

Perhaps you’ll want to stop for lunch at the Green Park Brasserie (www.greenparkbrasserie.com), located in what was the depot of the now defunct Green Park Railway Station. The brasserie has a friendly, attentive wait staff and a menu which heavily favors local produce, especially the selection of British cheeses.

Even if you’ve never read Sense and Sensibility, don’t have a clue where Northanger Abbey is, or couldn’t name the five Bennett sisters if your life depended on it, you should make your way to the Jane Austen Centre for a retrospective of not just the novelist’s life, but of the life of Bath during the time she lived there. Afterward, stop in for a spot of tea in the Regency Tea Room.

One thing you’ll surely want to do is search out Bath’s oldest house, now home to Sally Lunn’s Tearoom and Restaurant (www.sallylunns.co.uk.) Sally Lunn, a young French Huguenot refugee, settled in Bath more than 350 years ago, bringing with her the recipe for her namesake brioche. It’s the rare visitor who leaves Bath without trying one.

While Bath makes an easy day trip from London, you’ll probably want to stay over for a few days, with lodging options ranging from charming bed-and-breakfast inns to grand country house hotels. In the former category, a good choice is the Villa Magdala (www.villamagdala.co.uk), a boutique B & B with 20 stylish rooms, complimentary English breakfast and great location just a 10-minute walk from the city center.

If it’s grandeur you’re looking for, one of England’s most luxurious country house hotels is just six miles from Bath. Lucknam Park (www.lucknampark.co.uk) is a Palladian-style mansion situated in 500 acres of gardens and lush parkland. Even if you don’t stay here, book a table in the formal restaurant, or for a more casual meal, in the brasserie, located within its own walled garden.

Bath is one of Britain’s best loved destinations, and a BritRail FlexiPass makes it easy to get to from anywhere in the United Kingdom.