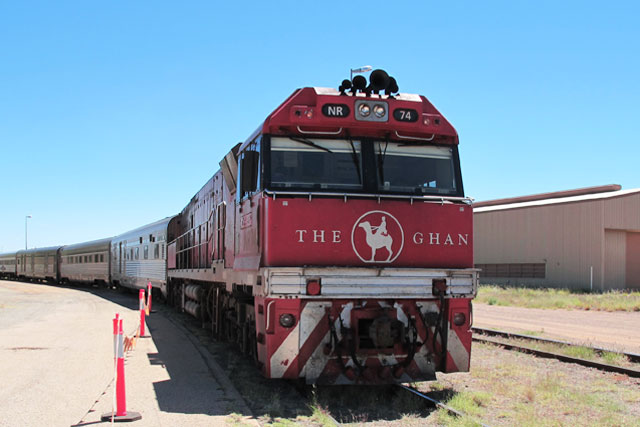 Travel Diary Part 2: A journey on The Ghan

On my third day, I got up early and got picked up at my hotel by a bus en route to the station where I would board The Ghan. The bus driver, I remember, had this typical Australian sense of humor. He made everyone feel comfortable as he was cracking jokes about different things. He also displayed his knowledge telling us about the history of The Ghan and the area.

The Ghan was named in honour of the Afghan cameleers who arrived in Australia in the late 19th century. They largely contributed to the discovery of Australia’s outback. When the rail line was completed they released the camels, which explains why there is now a small population of wild camels living in Australia.

Later that day, The Ghan arrived in a small town named Katherine. One nice thing about Great Southern Rail (the Australian rail provider that accepts the Rail Explorer Pass and operates the Ghan) is that they’ve organized a number of tours called Whistle Stop tours. You can get off the train for a couple of hours and take part in these short excursions to explore further beyond the rails. You can do bus tours, shopping, visit museums, etc. All in all, there are probably a dozen different things you can do. I saw there was a helicopter tour and since I had never been on a helicopter before, I welcomed the chance to do this tour. I flew over the area around Katherine including the beautiful Katherine Gorge. From this perspective high up in the helicopter, I could really get a sense of how vast the land is.

Day 4: Secrets of Alice Springs
The next day, the train arrived in Alice Springs. One of the reasons people stop in Alice Springs is to get to Uluru, a majestic rocky landmark that holds a special spiritual meaning to local residents. I opted against the four and half hour bus ride to Uluru and chose instead to visit the Old Ghan Museum which is in the same location as the Kenworth Truck Museum. That makes for a lot of vehicles and a lot of railway history in one place!

Travel aboard The Ghan resumed later on in the day. At various points along the route, they were announcing things that you may want to take a picture of. In one particular case, the train was making a wide angle turn. The thing is the Ghan is so long that despite sitting at the back of the train, I was able to take a picture of the train’s front cars.

Day 5: Arrival in Adelaide
After two nights on The Ghan, I arrived in Adelaide, my final destination. Adelaide itself is a lovely town. It reminds me of my hometown, Montreal; there are churches everywhere, it’s very easy to get around, there’s a beautiful market area and all sorts of lovely things to see and experience. Adelaide is a young and relatively safe city, as well as being a university town.

You can use the public transport system for free so I could use the tram to travel for free to the other end of town.

When I first arrived in Adelaide, I had the chance to tour around and to look at what was available in terms of activities. I found a photography course that seemed to be well ranked. I learned about ‘perspective’, ‘shadow’ and such. It wasn’t overly complicated and it gave me a chance to walk around, learn about Adelaide and take some photos at the same time.

Later, I took a bus trip to the Barossa valley, where the wineries are. It’s a stunning area. The entire road is lined with rose bushes that welcome you into the area. Everything is so well manicured and taken care of. I visited three different wineries: Jacob’s creek, Chateau Yaldara and Chateau Dorrien. This gave me the opportunity to sample a lot of wine and get a little tipsy in the process. It was a memorable excursion.