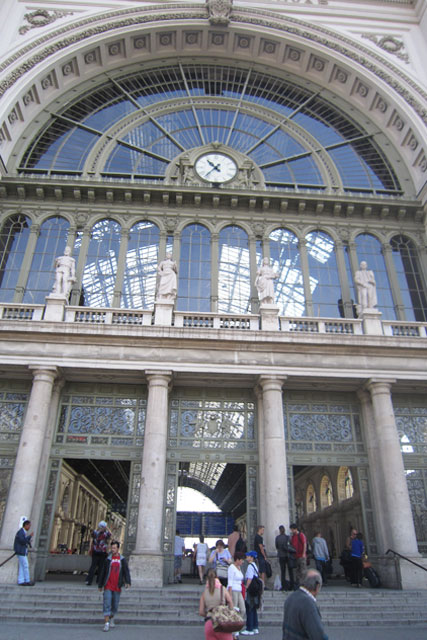 So you’ve gone and booked your InterRail or Eurail Pass* and you’re all set for an epic adventure on and off the rails. Good choice, you’re sure to have a ball weaving your way across one of the world’s most varied and rewarding railway networks.

For some the allure of InterRail is all about spontaneity. In theory you can throw a dart on the map and decide which fresh pastures to set your compass for. But unless you really like to live by a roll of the dice, a little careful forward planning and some tough thinking about you, your personal travel style and what’s realistic can only enhance the experience.

Night Trains are an unbeatable way to save time and travel vast distances, skipping across borders while you lay tucked into your bunk, but unless you enjoy staggering around strange cities like the living dead it pays to book them wisely.

Check arrival times. Do you really fancy alighting in a new place at 4.30am? Maybe you can stay on for a few extra stops and double back on yourself? Ok, so it means a few extra hours on a train, watching the world glide by, but if the thought of that makes your hiking boots crumple, why are you doing this trip anyway?

Get your Reservations Sorted

So does an InterRail pass give you the keys to Europe? Well, there’s no doubt it provides a great value way to swing through a good chunk of the continent if you move swiftly, but it may not be a completely free ride. These days you may need to factor in some reservation fees into your budget.

It is still possible to avoid reservation fees of course. On many routes you can opt for slower, local trains, many of which either don’t require reservations or where these are a token cost of 2 or 3 Euros, particularly in eastern Europe. But on high speed trains and the more well-trodden routes you will probably have to bite the faster-than-a-speeding-train bullet.

It’s worth getting into a healthy routine and simply booking your next reservation or two at the station when you arrive. This gets it out of the way, leaving you free to roam without having to make an annoying detour back to the station. Be prepared to queue in some of the bigger hub cities.

There are as many potential itineraries as there are starry-eyed InterRailers of course, but here are a few pointers to keep you on the straight and narrow rails.

It’s worth giving a lot of thought to how many cities you can sensibly cover with the duration of your pass. You’ll likely spend the first day orientating yourself and the second narrowing down your list of ‘must-see’ sights , so 3 nights per city will fly by quicker than you think.

Are you travelling solo, with a partner or in a group? This could well have a bearing on it too. Are you hoping to bag a brace of classic capital cities, get immersed in national parks and beauty spots or will you choose a quest theme, perhaps tracing the fringes of the former iron curtain or plunging deep into the bosom of the Alps for sheer scenic indulgence?

Once you know what sort of adventure you’re hankering for, there are no shortage of great resources to help you get down to the nitty gritty of planning your route, not least the pages on this very site of webness.

Check out www.railrouter.co.uk app which gives detailed info on connections, journey times for over 800 cities. German railway site www.bahn.de is very useful for a quick check of departure times, connections and night train availability, since it covers not just Germany and surrounding countries but most of Europe too.

A Month on the Rails

This September ACP Rail kindly supported our month-long, 10 city trip. You can see our route here.

Our theme was InterRail for Grown Ups, travelling as a couple more used to wheeling suitcases into hotels than lugging backpacks around hostels. We roamed at a leisurely pace, with no real hurry to tick off the big sights – instead culture, food, architecture and neighbourhoods were our touchstones.

It mostly panned out how we planned it, allowing for the odd – inevitable – hitch! We elected to sweep through mostly major cities in central and Western Europe. Starting in licentious Amsterdam, with its thronged but surprisingly civilised Red Light District and multi-cultural markets around De Pijp, before slipping into almost as liberal Berlin, where a visit to the Berlin Wall Memorial and the former Jewish district of Hackesche Hofe, whose arcades have been transformed into a series of shops and galleries, provides a sobering contrast to the freewheeling hipsterism of Pranzlauer Berg and Mitte.

From here it was an easy 4 hour jaunt to Prague, via the gloriously scenic Elbe River Valley, chock with cuckoo clock houses and densely wooded, overlapping peaks. Definitely one to do in daylight. For us Prague was all about the smoky sausages and artery clogging dumplings, offset (well, a little) by a leisurely stroll down Petrin Park and around the Castle Gardens.
Once we’d exhausted Krakow’s splendid Italianate Old Town, we took a glance at the city from a less idealised perspective; puttering about in a battered Trabant on the Communist Tour we visited Nova Huta, an eerie 1950s Communist new town, planned around the vast steel works which gave the town its name.

It all began to unravel in Budapest, with a 2 night stay being swiftly compressed to just a few hours mooching around the marvellously decrepit Keleti Station, one of Mittle Europa’s faded grand dames of the railways.

Vienna provides such a surfeit of architectural eye candy, it’s hard to know what to gawp at first: the unfettered Art Nouveau extravagance of the buildings around the NaschMarkt or the equally excessive palatial white buildings all around the Ringstrasse. Such decadence naturally calls for numerous stops in the city’s cafes which seem suspended in the post-war atmosphere of Graham Greene’s Third Man.

Lausanne was our wild card – the least obvious stop on our tour of big name acts. It’s a jumbled place, full of surprises. A hilly city on the banks of Lake Geneva which feels more French than much of France, bisected by a massive Roman-style viaduct. Up high it’s all windy alleys and Mansard roofs, while down below on the Flon it’s all iron trees, sharp angled modernist cubes and African-inspired street art.

Paris is an old flame which still burns brightly enough for us. Montmartre will feature on most wishlists, but we had the special treat of a local’s Movie Walks tour, taking us around some of the lesser trodden, cobbley back streets (yes, they’re there!) which branched out into a culinary adventure in Chatelet, or ‘Tamil Town’ as it’s often dubbed, for tasty, pocket pleasing Sri Lankan food in the humblest of settings.

Bordeaux is all about the wine. No surprises there of course, but a morning at Ecole Du Vin getting your nose around the many aromas found in your glass of Merlot should knock even the most jaded palette into shape. Come sunset the riverside promenade is not to be missed, where you’ll have to weave your way around the multi-wheeled locals en route to the Water Mirror, a purposefully flat fountain reflecting the Place de la Bourse in all its splendour.

Finally we paid homage to the cult book and film and took the Night Train to Lisbon, via the Spanish/Basque border town of Irun. Lisbon’s like a piece of South America adrift and clinging to the edges of Europe. Hop on to the 28 tram, as it judders its way up and down the city’s impossibly narrow alleyways and much later judder some more yourself in the seething bars and clubs of Bairro Alto which rumble on long into the night.