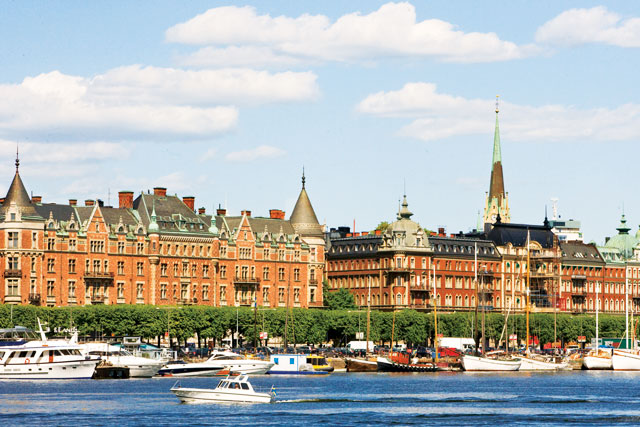 For the ultimate chance to take in Europe at your own leisurely pace, why not head further north to the relaxed havens of Oslo and Stockholm, connected so conveniently by rail?
Use your rail pass or point-to-point ticket to combine the trendy affluence of the Norwegian capital with the 14 highly-cultured islands of the Swedish capital, and even enjoy fjord-filled and tree-lined stop-offs in between.

Outstanding Oslo
Begin your journey amid the historic buildings of Oslo, the tranquil city synonymous with the Nobel Peace Prize and Scream painter Edvard Munch. Both these local gems are feted within the conurbation at Oslo Town Hall (Radhus) and Munch Museet respectively. Weave in and out of impressive castles and fortresses which triumphantly overlook Oslo harbor, and marvel at the architectural splendor of Oslo Cathedral and over 300 years of history within. Secure your prize picture of the monolith at the stimulating Vigeland Sculpture Park and pet the zoo animals at Ekeberg Park. Take a tour around the fabulous Oslofjord at the edge of the city, or simply admire the boats of yore at the Viking Ship Museum. In the summer, get an unexpected sun tan at the beaches of Langoyene, while in winter try out the ski-slops at the snow-white bliss of Holmenkellen.

Joyful journey
When you’re ready (because everything’s at your own pace here!) make your way to Oslo Central Station, train ticket in hand, and trade in Norwegian nobleness for Swedish sophistication. On the way to Stockholm Central Station, you may choose to stop off at Norrkoping for a boat-session of Island-hopping, or Alvesta to witness first-hand the centuries-old local profession of glass-making. This is the just part of the beauty of Oslo to Stockholm by train.

Stunning Stockholm
In the Swedish capital itself, prepare to be overawed by the culture, traditions and history which stretch back 1000 years. The ideal starting place is the Stortoget (Big Square), surrounded by a host of ancient structures and landmarks. The beautifully-presented palaces of Stockholm and Drottningholm represent the public and private residences of the royal family respectively. More modern architecture, meanwhile, is represented by the Globen, the largest Globe Arena structure of its kind in the world today. The city’s international prestige can be witnessed in the Stock Exchange building, home to the Nobel Library and Nobel Museum. Panoramic views are available from the iconic Katerina Lift while an alternative water-level perspective is offered by Lake Malaren, Sweden’s third biggest. The Stockholm Pass, meanwhile, entitles holders to access around 100 attractions and museums for free.

Reserving tickets
One way to travel from Oslo to Stockholm by train is by point-to-point ticket, ideal for travelers making one specific journey. A Norway-Sweden Eurail Pass is another possibility. Those who wish to take in Scandinavia on a wider scale will benefit from the Eurail Scandinavia Pass, which also covers Finland and Denmark.  Also available is the Eurail Norway Pass or Eurail Sweden Pass, as these passes are both valid on direct border-crossing trains: SJ: Stockholm – Oslo – Stockholm. European residents, meanwhile, can also benefit from an InterRail Sweden Pass or InterRail Norway Pass.

Two direct services operate from Oslo to Stockholm daily, with extra night trains being laid on during the summer months. As for the travel time, it’s the most relaxing six hours in Europe passengers are likely to spend.