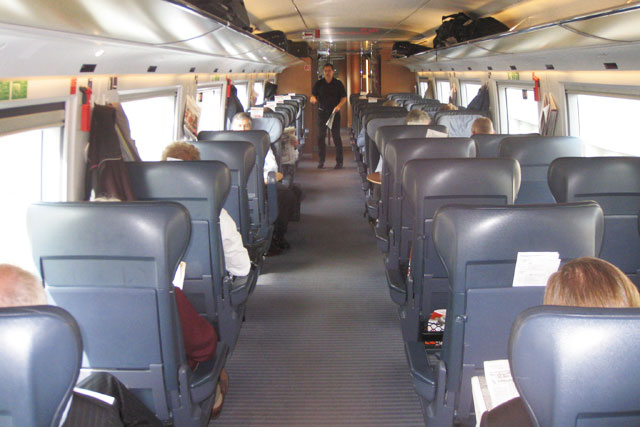 One sunny morning last spring in Milan, having acquired a Eurail Global Pass, we boarded a train and headed south to the ancient city of Cremona whose fame is entwined with the violin. The legendary Antonio Stradaveri of Cremona built them in the 17th century and they’re still regarded with respect bordering on reverence. We spent pleasant, instructive days in Cremona, even visiting one of its 150 violin makers.

But Cremona was but the first stop on our train travels lasting over a month in Europe, visiting places with distinct names and a unique place in memory: Milan, Menton, Alassio, Beaulieu sur Mer, Nice, Brussels, Bruges, Cologne, Basel, Zurich, Lucerne, Amsterdam, and Leiden.

For all of our journey my sense of why we were doing it was one Ernest Hemingway had in mind long ago: “It is good to have an end to journey to, but it is the journey that matters in the end.” Especially for train travel. Sitting in its peaceful cars, looking over lush fields of spring, aged forests, and silver blue waters, are reminders that in the end, travel is its own reward. As the ancient seer Augustine put it, “The world is a book and those who never travel have read only the first page.”

The train is convenient: its stations always inside the town or city not as remote as airports; we know that it’s social, even in the exchanges with some conductors like Italian Enzo Foscielio, who treated us as his friends, albeit as we both well knew, for a brief sojourn beyond the memorable seaside town, Nice. And of course the train is less intrusive on the environment, especially compared to the emissions of countless automobiles.

I’ve never felt that travel should shield us from seeing the world as it is. The train helps us see reality including the modern world’s graffiti. “The use of travelling,” the great Samuel Johnson once said, “is to regulate imagination by reality.” Years of train travel have taught me that. So I look out upon apartment walls near and within city after city, Paris, Rome, Brussels, to see clothe lines hanging from balconies, and am reminded of the truth train travel asks us to acknowledge: life is not luxury. So in the years ahead, as far as the imagination can reach, I expect to be in yet another train station, ready to board the train for whatever it shows me.

Kenneth Bagnell lives in Toronto and is a widely published travel journalist and author of two books of Canadian social history: “The Little Immigrants” and “Canadese: A Portrait of the Italian Canadians” both published by Macmillan of Canada and available through Amazon.com. (www.kennethbagnell.com)