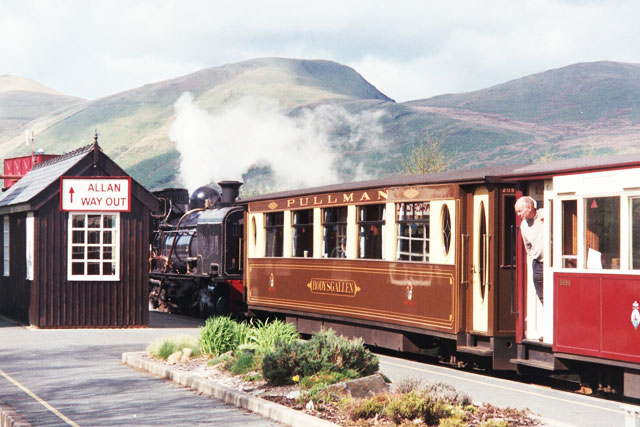 Progress has taken a few steps back to yesteryear in Porthmadog, the Welsh town that has become one of the world’s top steam-railway centers. Each year about 300,000 steam-locomotive enthusiasts and day-trippers from around the globe make their way to this town of 4,000 on the Welsh coast. They come to travel on the oldest operating railway in the world — the Ffestiniog Railway — or its newly opened companion, the 25-mile-long Welsh Highland Railway.

Visitors can ride behind the most powerful narrow-gauge steam locomotives in the world, visit an iconic castle dating to the 13th century, enjoy the wild and spectacular scenery of north Wales, or “train hop” from station to station, stopping at a track-side pub or taking a short hike before climbing aboard again.

Both railways operate on 2-foot-wide narrow-gauge tracks. The narrow cars and engines pull up cheek to jowl at Porthmadog’s Harbour Station, departure point for the two lines. The Welsh Highland route was completed with much fanfare in the spring of 2011. Founded in 1832, the 15-mile-long Ffestiniog Railway originally carried slate from the mountains near the tongue-twisting town of Blaenau Ffestiniog to the Porthmadog docks.

In Britain, such lines are called heritage railways — abandoned routes that have been brought back to life as tourist railroads. But there’s a difference here. Unlike many of these isolated rural railways, both the Ffestiniog and Welsh Highland offer connections to Britain’s mainline rail network at Porthmadog and Blaenau Ffestiniog, allowing easy access for travelers without cars.

Closed to passenger trains in 1936, the Welsh Highland Railway cost $45.3 million to rebuild with financing coming from the Welsh government, lottery proceeds and private fund-raising efforts. It was a job well done, bringing modern improvements to a right-of-way that had languished for many years.

Today, the trains carry passengers on a coast-to-coast run from Porthmadog to the imposing walls of Caernarfon Castle, a World Heritage Site that was the setting for Prince Charles’ investiture on July 1, 1969, as the Prince of Wales. For passengers making the approximately $52 round-trip from Porthmadog, there’s enough time to tour the Norman-style castle, which dates to 1283, and the nearby town before heading back. Some outings can be done in reverse, starting at Caernarfon and heading south.

Full of switchbacks and horseshoe curves, the route puts the 60-ton steam engines through their paces as they make their way from sea level to the line’s highest point at 650 feet. I saw this first-hand from the footplate of Engine 138, a 62-ton NG/G16 Beyer Garratt, in technical terms, which formerly worked for South African Railways. Inside, both the engineer and fireman were kept busy minding a confusing array of dials, valves and a throttle as well as a whistle cord. A tiny window on each side looks out over the engine’s boiler, giving an obstructed view that required crew members to alert the other as to what they were seeing down the line.

“Clear,” shouted the fireman as he surveyed an approaching grade-level crossing. The same dialogue came with every trackside signal, as each shouted to the other above the throbbing steam engine that the way ahead was clear. Top speed is 25 mph.

At one station, the thirsty engine was serviced with a long fill-up of water from an overhead pipe. Engine 138 had been converted to an oil-burner, saving the fireman the strain of shoveling a ton and a half of coal into the firebox during the run. However, coal has returned to power some of these steam mammoths as oil prices soar.

The tracks run through the heart of Britain’s Snowdonia National Park. One of the stops, Snowdon Ranger Halt, is next to a youth hostel and a path leading to the summit of 3,560-foot Mount Snowdon, the highest peak in Wales and England. (A separate narrow-gauge line, the Snowdon Mountain Railway, runs to the summit from the town of Llanberis, Wales.)

Along the way, the trains run across the tidal flatlands next to the River Glaslyn and then along the rapids of the river through the Aberglaslyn Pass.

There are tunnels and villages springing out of nowhere, the most pretty of which is Beddgelert, which offers cafes, shops and paths along the river.

“It’s the only way to go,” my wife, Sharon, said as she rode in the Glaslyn, an extra-fare observation car with stuffed armchairs and a large curved glass window at one end. Indeed, she was sitting on the very seat that Queen Elizabeth II had sat on when she rode the line in 2010 with Prince Philip. Aboard the train there is a buffet trolley service and a restroom.

“This railway is quite different from any other railway in the country,” said Paul Lewin, general manager of the parent Ffestiniog company. “We wanted to make it a very different experience. And with the observation car with the big glass end, the idea was that you could get as close as possible to the scenery of Snowdonia.”

As we pulled into each station, I caught a sight not often seen along Amtrak routes. Squadrons of men and women were tending to immaculately kept platforms and shelters. Some were sweeping, others were watering flowers. Bridges, culverts, signals and platforms all appeared new. In fact, the only thing showing any hints of age were the well-maintained engines and cars.

There’s a secret to this army of caretakers, I found. Many are volunteers who are members of the Welsh Highland Railway Society, formed to support the railway. The two railways have 8,000 such members, of whom 1,000 regularly come to work on jobs ranging from crossing guards to on-board staff. Some stay for a week or two in a railroad-owned bunkhouse.

“I can’t get him to take out the garbage at home,” said one woman of her husband, a long-time volunteer who was dutifully polishing a brass plate on the side of one of the engines.

Well, he can be forgiven. After all, he’s in the enviable position of keeping the past alive on a railway that has brought travel by steam up to date.

Located in North Wales, Porthmadog is on the British mainline railway network, requiring one change of trains for travelers from London. The full journey, coursing through scenic central Wales and along the coast of the Irish Sea and past Harlech Castle, takes about six hours. The mainline rail station in Porthmadog is a 15-minute walk from the Welsh Highland Railway’s Harbour Station. Holders of BritRail passes are entitled to a discount on both the Welsh Highland and Ffestiniog railways: https://www.acprail.com/britrail-teams-up-with-heritage-railways

The Welsh Highland Railway and its older line, the Ffestiniog Railway, operate year-round from Porthmadog’s Harbour Station, with limited service in the winter months. In summer, it’s possible on a well-planned trip to travel on both lines in a single day. Diesel engines occasionally replace steam service, depending on maintenance needs. Check the schedule. A gift shop and Spooner’s Cafe and Bar are located in the station: www.festrail.co.uk.

In Porthmadog, we stayed at Yr Hen Fecws, 16 Lombard St. This highly rated B&B in a Welsh slate building offers seven en-suite bedrooms and a small cafe-bistro. A pub is nearby. Harbour railway station is a five-minute walk: www.henfecws.com.

For information on events, travel and lodging in Wales: www.visitwales.com

For information on planning a journey to the United Kingdom: www.visitbritain.com