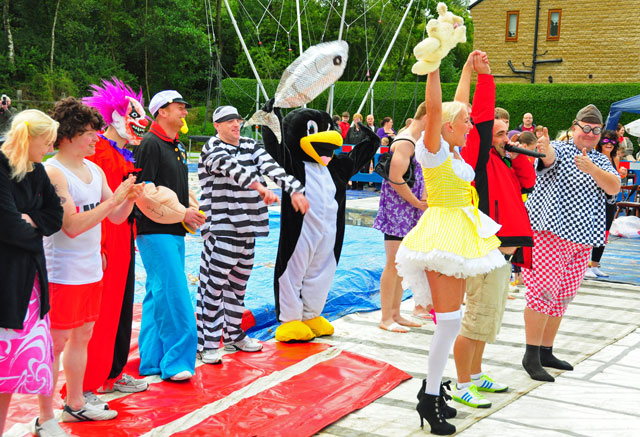 They are hosting the Olympics in 2012, but that’s not the only fun and games in the UK. The normally buttoned-down Brits let loose in unexpected ways, especially when it comes to unusual competitions. Take BritRail across England to discover some of these more unusual events.

Gurning World Championships, Egremont, Cumbria, third Saturday in September: With a horse harness draped around his neck, a young man distorts his face; twisting his jaw sideways and drawing his bottom lip over his top lip. He’s “gurnin’ through a braffin’,” at the World Championships. The saying, “Don’t make that face or it will stick” certainly applies to some contestants who’ve gone so far as to have their teeth removed—all in hopes they’ll make the most gruesome expression during their face-off.

Haxey Hood, Haxey, North Lincolnshire, 12th day of Christmas: Players in extravagant costumes dressed as a Lord, a fool and 11 “Boggins” participate in a pub crawl, singing traditional songs. This is followed by the fool leading a procession where he is allowed to kiss any woman along the way. After making a speech and being “smoked” with a fire lit in damp straw, he proclaims, “Hoose agen hoose, (house against house), toon agen toon (town against town), if a man meets a man knock ‘im doon (down), but doan’t ‘ot ‘im (hurt him)”—and the mayhem begins. A two-foot leather “hood” is tossed, then teams “sway” crowds toward participating pubs. The game is won when a landlord on the stoop of the designated pub touches the hood. He then serves a round of drinks, pours beer over the hood and hangs it in the bar until New Year’s.

Olney Pancake Race, Olney, Buckinghamshire, Shrove Tuesday: Women dressed in skirts, aprons and head covers sprint with a frying pan filled with a pancake, which must be flipped while crossing the finish line.

Cooper’s Hill Cheese-Rolling and Wake, Brockworth, Gloucestershire: Participants chase an eight-pound round of Double Gloucester cheese down a hill with a 1:2 gradient. This cheese is served with rolls—but not the bread variety— as contestants tumble head-over-heels.

World Gravy Wrestling Championships, Rossendale, Lancashire, Monday bank holiday in late August. On the night prior to the 2011 competition, planner Andy Holt mixed up 440 gallons of brown Lancashire gravy from a family recipe. Each match lasted two minutes, with the two wrestlers slipping and sliding in the oily sauce.

Olympic fans will want to visit Much Wenlock, Shropshire, where the modern Olympics began.