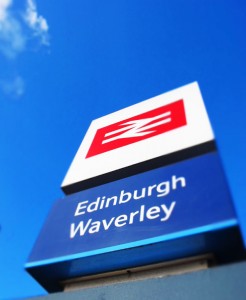 My husband Carl and I travel often to the U.K.–and we’re always thrilled to have our 4- or 8-day BritRail Flexi-Passes in hand!  Train journeys across England, Scotland, and Wales are some of our most memorable experiences–whether it’s a sleeper excursion, day-long trip, or simply short commuter travel.

And one especially stands out in my mind–one special evening in a small Scottish town.  As I’ve learned, sometimes the best, most fun travel adventures are those that aren’t planned.

Carl and I had spent several days in Edinburgh (one of our favorite cities)–and on one early evening, after a busy day of sight-seeing and shopping, we headed back to our hotel. I had sprained my ankle and, tired, hobbling, and carrying packages of souvenirs, couldn’t wait to get back to our room for a long, relaxing soak in the tub.

“Let’s get on one!” Carl cried out.
At first I thought he was joking but–knowing my train-buff hubby–I should have realized that he was intent on riding the rails. Right now. Spur-of-the-moment.
“Where to?” I weakly asked.
He didn’t respond, but just grabbed my hand. “Come on! Let’s go!”

Hurriedly limping, I followed him and climbed aboard the closest car. We grabbed the last two seats, facing each other and sitting next to two middle-aged women who were dressed in business attire, intently reading the evening newspaper. I felt a bit out of place in our jeans and walking shoes. We were obviously the only tourists aboard.

Just as we sat down and caught our breath, the train lurched and headed off–somewhere.

“So, where are we going?” I inquired again.
“Oh, I thought we’d ride to the end of the line and then take a taxi somewhere for a nice dinner,” Carl nonchalantly responded, as he showed the conductor our BritRail Passes.  We discussed our plans some more.
After several moments the sophisticated woman next to me quietly put her newspaper down and cleared her throat.

“I’m sorry to interrupt,” she said in her charming Scottish brogue, “but North Berwick is the end of the line, and I’m afraid there are no taxis there–it’s a very tiny train station.”

We told her we appreciated her advice, and asked her what she would suggest.
“When you get off the train, turn left from the station, and then left again,” she said. “Down the street on the right side you’ll find a very nice restaurant called ‘Nether Abbey.’  It’s just a five-minute walk.”

We thanked her, and learned from her that North Berwick is a picturesque town on the shores of the tongue-twisting “Firth of Forth” estuary (Carl and I have crossed its famed steel cantilever railway bridge, completed in 1890 and an engineering marvel).  North Berwick also has sandy beaches and some of the best golf courses in Scotland. On the coast is the mid-14th century Tantallon Castle.

After a 35-minute ride, we reached North Berwick. We followed all the passengers off the train–many of them carrying briefcases and hurrying in the dark of night to loved ones who had come to pick them up. The woman passenger motioned for us to follow her, as she greeted her husband. As they walked to their car, she pointed in the direction that we should go and then called out a friendly good-bye.

Still limping, I walked alongside Carl on a dark street with huge trees, the branches reaching to the sky. There was a full moon and gothic-looking, two-story stone houses with massive fireplaces. Now and then a car slowly drove by, helping us to see better with the headlights–but otherwise it was quiet and a bit eerie.

Finally, as we rounded the street, down the road on the right side was a golden light glowing in the darkness. As we got closer we could make out the sign, “Nether Abbey.”
“It sounds like an Alfred Hitchcock movie!” I exclaimed. We crossed the street and walked up to the restaurant, part of a hotel. Several locals were at the bar, having a good time and chatting. Escorted to the small dining room, we were the only diners there besides an elderly Scottish couple. A waitress showed us the seafood specials that were written on a chalkboard she held.

We had delicious smoked salmon and fillet of haddock, wine, and dessert–a relaxing time together savoring our “getaway.”  After an hour we quickly paid our bill:  It was time to walk back to the North Berwick station and catch the 8:20 p.m. train–the last one back to Edinburgh that night.

This time we were the only passengers in the entire car. As we stretched out on the seats, passing by flats and homes along the way–fleetingly observing families at dinner, watching the telly or sitting at computers–Carl mischievously smiled.

“So–how’d you like that?”
I had to admit that it rejuvenated me and had been a nice Scottish train surprise!

For more information on planning your trip to Scotland:  www.visitscotland.com  www.visitbritain.com