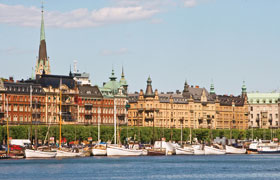 A Sweden rail pass provides access to your choice of destinations, including major cities like Stockholm, “home of the Nobel Prize”, Gothenburg, “the city of great cultural and sport events” and Malmö, “the Swedish design hub”. Visitors also love these smaller and quaint cities: Kiruna, set in the Swedish Lapland, Uppsala, one of the oldest university cities in Scandinavia, and Kalmar, close to the Kingdom of Chrystal with unique glass works.

And why not extend your travels into Sweden’s neighbouring countries?  For example, Oslo and Narvik in Norway and Copenhagen in Denmark, which are all easily reached by train. Or create your own trip between the royal capitals of Scandinavia; popular routes and frequent service runs between Stockholm, Oslo and Copenhagen.

What’s on in Sweden this summer?

More about a Eurail Sweden Pass:

More about an InterRail Sweden Pass:

Welcome to Sweden by train!