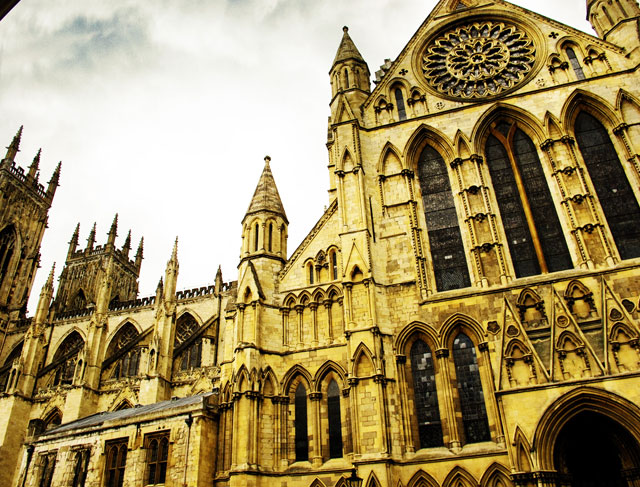 May 20, meet Ellie, The European Eagle Owl, housed along with other birds of prey on Swinton Park Castle’s grounds.  After learning about all the resident birds, Ellie was released and invited to fly, and then land on each of our hands, with the help of pheasant meat bribes.   Such a cool experience to feel the power of this bird’s flight!

After one last stroll around the castle grounds, it was time to make our way to the nearby city of York.  We made use of the Yorkshire Sightseeing Pass beginning with a visit to the National Railway Museum, which houses a number of old steam locomotives, wagons & carriages, followed by a ride on the antique inspired road train which stops just outside York Minster.

York Minster, northern Europe’s largest Gothic cathedral, is certainly impressive as you get the real scale of the building comparing how small people appear when standing outside its steps.  Upon entering we heard the organ playing some fabulously loud and moody piece, where a sign indicated there was an organ recital – lucky us!  The cathedral is huge with many different sections to explore, including a quire, chapter house, under-croft, treasury and crypt.  You really get a sense of how much history there is in this masterpiece, and a bit of an ‘Indiana Jones’ flashback, as you walk over old inscribed grave tiles and see the collections of silver goblets and other artifacts.

Next we made our way to Shambles Street, voted by Google to be Britain’s most picturesque street, lined with shops, restaurants, pubs, cafes, bakeries etc…and is located amongst a central maze of other quaint streets, where we found a cozy bistro to break for lunch.

Jorvik, was the next stop on our list as it represents an archaeological excavation site from the Viking Ages.  We stepped onto a mobile ride-type capsule that transported us through an entire re-creation of a Viking village.  We had no idea what to expect at this attraction and, although we thought the ride aspect was a bit weird, it was still an interesting display of Viking history.

We continued our tour of York onto Cliffords Tower for a climb up the steps and quick visit and then made our way to York Castle Museum, where unfortunately we didn’t have much time to explore; it was already time to catch a train to Liverpool for the night.

Arriving in Liverpool was exciting as the minute we stepped off the train we could feel the energy of this city and were happy to realize it was a Friday night!  We walked from Liverpool Limestreet station to our trendy hotel, base2stay Liverpool, on Seel St. And it just so happened that this street was conveniently located on the same street as some of Liverpool’s best restaurants, bars and clubs.  We found a Spanish tapas restaurant for a festive dinner, amongst some lively groups and then walked down Seel St. where we saw a few bands unloading for the night and heard great live music emanating from Heebie-jeebies so we popped in for a bit.  Last stop –  Alma de Cuba, very popular among locals and visitors alike, it has been awarded Best Bar, Best Restaurant and UK’s Best Venue – set in an old church, with great music and Cuban dancers.

For more information on planning your trip to York: Yorkshire

For more information on planning your trip to Liverpool: Visit Liverpool

Stay tuned for day 8, where we take in the city of Liverpool and journey to Wales…

Jen’s highlight of the day: Listening to the organ recital in York Minster.  It was hauntingly beautiful and gave her goosebumps.

Angela’s highlight of the day: People watching in Liverpool: beautiful men and women.  The women were dressed to the nines with big hair, 70’s pantsuits, 6 inch heels and retro makeup…and I don’t mean just a few, I mean they were all dressed up sporting the latest fashions!