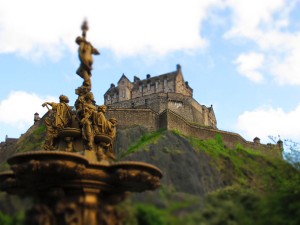 May 18, we woke up in Glasgow and headed straight for the City Sightseeing bus, which gives a tour of the city and makes 24 stops at points of interest where you can hop on and off to explore.  The people sitting across from us kept raving about the great value of this ticket and we absolutely agree; here’s why:

As we only had a few hours in Glasgow we took the full tour which lasts approximately 1hr 45min and got off at two stops : Glasgow Cathedral and Willow tea rooms.  However, the general consensus is that Kelvingrove Art Gallery & Museum, People’s Place, Botanic Gardens and Breyers Road are also must sees in Glasgow.

Glasgow Cathedral is gorgeous, with its Gothic design, stained glass windows, and access to the tombs – plus it’s free!  We then moved on to the cemetery located on a hilltop behind the cathedral.  The cemetery has many extremely old gravestones and was well worth the visit.

Willow tea rooms is known not only for its delicious selection of teas but also as it was designed by Mackintosh, an eccentric architect back in 1904.   We enjoyed a light lunch and were ‘on the rails again’ headed for Edinburgh.

Edinburgh is largely built around its grand castle, located on a rocky hilltop and surrounded by cobblestone streets packed with a seemingly endless number of pubs, restaurants and souvenir shops – known as the Royal Mile.  We took advantage of the beautiful sunny weather and walked until it was dinner time, where we opted for the Royal Cafe, an award winning pub.  Then we sought out a ‘real Scottish pub’, Sandy Bells and Whistle Binkies, which both featured live music and a great selection of ales on tap.  A night out in Edinburgh is not to be missed, Viking hats and all!

For more information on planning your trip: Visit Scotland.

Jen’s highlight of the day: The City Sightseeing bus tour – the ease of it and the fact that the majority of Glasgow’s attractions are free, making it accessible for everyone to enjoy.

Stay tuned for day 6…onto a night in Swinton Park Castle (yes, you read that right, CASTLE!!!)