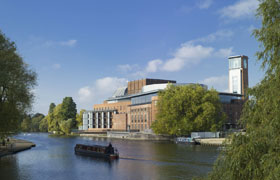 From enchanted palaces to Shakespeare theatres

England has so many places to visit, from historic properties, to modern cities and coastal getaways; it’s tricky to make an itinerary that covers it all.  On that note, here are a few new attractions to add to the list, that you also won’t want to miss this summer!

The Royal Shakespeare Theatre opened its doors to a new 1000-seat thrust stage auditorium last month. Featuring the largest open stage, which extends into the audience on three sides, this design creates a more intimate performance experience for all. In addition to the new stage, the new building features a rooftop restaurant, Avon River-front café and art exhibition spaces. To mark this occasion, the Royal Shakespeare Company will also be celebrating its 50th anniversary and have called April to November its birthday season with events to be announced this spring. www.rsc.org.uk.  We also invite you to visit Shakespeare’s estates in and around Stratford-upon-Avon with the Shakespeare’s Houses pass.

Throughout 2011-2012 enjoy a magical experience at Kensington Palace! As you make your way through the State Apartments, embark on a quest to discover hidden tales of the palace’s seven princesses, dating as far back as Queen Mary II in 1662 until, Diana, Princess of Wales, all former residents of Kensington Palace. This exhibition is also home to the Royal Ceremonial Dress Collection, highlighting royal dress and its relation to contemporary fashion, as well as performance and dreamlike installations. With the purchase of Historic Royal Palaces visit Kensington Palace, in addition to visiting the other famous palaces of London, including Hampton Court Palace, Tower of London and the Banqueting Hall.

Situated on the Yorkshire coast in the beautiful town of Scarborough, Europe’s largest open air theatre opened in 2010, accommodating over 6,000 seats.  The stage is set on an island in the middle of a lake with fixed seating for the audience opposite, making for a unique outdoor experience.  Look forward to performances featuring live music, opera, sporting events, family productions, comedy and more – with the 2011 season still to be announced.  www.scarboroughopenairtheatre.com

With year-round indoor activities for the whole family, Trafford Quays Leisure Village offers an endless list of options from indoor skydiving at Airkix to skiing at the Chill Factore’s real snow ski-slope, plus bowling, laser quest, rock climbing, golfing, shopping or a break at the movies. A further highlight is the LEGOLAND® Discovery Centre, with over two million LEGO bricks, children aged 3 to 12 years will be in LEGO heaven. www.traffordcentre.co.uk/tqlv

Also to look forward to, with openings coming soon…

The Hepworth Wakefield in Wakefield will open May 21: designed by internationally acclaimed British architect, David Chipperfield, The Hepworth will be the largest art gallery outside of London and will show for the first time a unique collection of sculptures by Barbara Hepworth and Henry Moore, two of the most important sculptors of the 20th Century, born and raised in the Wakefield district. www.hepworthwakefield.com

Museum of Liverpool will open July 19: this new museum will be the largest newly-built national museum in Britain for over a century, featuring four main themes: Port City, Creative City, People’s City and Global City.  The Museum of Liverpool is located on the city’s beautiful waterfront, which is part of Liverpool’s UNESCO World Heritage Site. www.liverpoolmuseums.org.uk