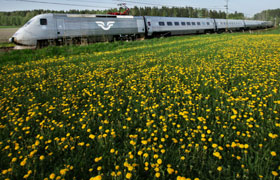 The joys of traveling aboard an SJ high speed train

Sweden’s newly refurbished SJ high speed trains are an absolute pleasure to travel on, including speedy arrivals, onboard bistros, wireless Internet access, and electrical power points for radio and music channels at your seat.  Passengers can select either standard class or first class seating, where first class features more spacious seats and complimentary coffee, fruit, newspapers, Internet access and breakfast included before 9am.  First class passengers can also pre-book a hot 3-course meal to be served at your seat.

SJ high speed trains run between the biggest cities in Scandinavia and Sweden. You can, among other cities and destinations, travel with a SJ high speed train to and from Copenhagen, Stockholm, Malmö, Jönköping, Karlstad, Gävle, Gothenburg and Sundsvall.  The journey between Stockholm and Göteborg, for example, takes just 3 hours.  As some travelers would prefer to travel by night and tour by day, which can be very convenient if you’re short on time, there is also a great selection of domestic night train routes: 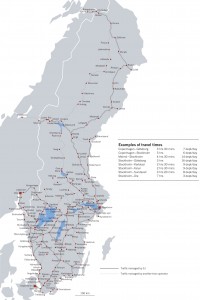 We are proud to announce that we will be hosting the world premiere of the international space exhibition “NASA – A Human Adventure”, an exhibition of 400 authentic items, many on display for the first time. The exhibition will continue on a tour of Europe and the United States.

Göteborg Horse Show has been voted best indoor horse show in the world by International Jumping riders in 2006.

Vasaloppet Ski Race. The world’s longest cross-country race between Sälen and Mora in Dalarna covering 90 km (56 miles) with some 30,000 participants.

Museums, galleries, cinemas and a number of other culture organizers are open all night long.

One of the world’s largest running events, Göteborg offers the charm of a small town and the opportunities of a big city.

Stockholm Marathon is ranked as the No 1 destination marathon in the world by “The Ultimate Guide to International Marathons”.