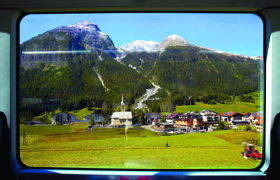 Here are some favorite routes in Europe

Scenic Routes in Great Britain – access all these routes with a BritRail Pass!  Of course this list isn’t exhaustive as there are so many scenic routes in the UK, but here are some suggestions to get you started.

Scenic Routes in Europe – some of these routes can be traveled with a Eurail Pass valid in the mentioned country, whereas others are special scenic ride routes requiring their own ticket (**).

Austria’s Semmering Line: a UNESCO World Heritage railway, it runs over 16 viaducts and through 15 tunnels between Gloggnitz and Semmering.  Its claim to fame – making areas of great natural beauty more accessible.