Trenitalia’s flagship line of high-speed commuter trains consists of the Frecciarossa 500 ETR and, as of 2015, the ETR 1000. Both of these mighty Trenitalia Frecciarossa trains combine fast travel with deluxe comfort and provide a reliable link between most major city centers within Italy. Among the popular routes, are Rome to Venice, Milan to Florence and Rome to Naples. Frequent and prompt departures are available daily.

For fare details please read more about Trenitalia e-tickets. There are also four class levels to choose from, catering to your level of service (Executive, Business, Premium or Standard).

Come ride the “Red Arrow” and get a little taste of Italian high-speed hospitality!

The total dimensions of your luggage set must not be larger than 250 cm (based on height, length and width) and its total weight must not exceed 25 kg. Door-to-door delivery and porter assistance services are available for a small fee in certain cities in Italy.

Regional trains marked with a bicycle sign will accept them on board for a small fee. You may carry your bicycle free of charge aboard domestic trains provided it is kept in an appropriate bicycle case. The bike case’s total dimensions must not exceed 80 x 110 x 40 cm and it must be placed in the designated storage space on the train.

You are allowed to ride the train with your pet. Free transportation is restricted to small animals only such as cats, small dogs and birds. Pets must be kept in a cage or similar enclosed carrier no bigger than 70 x 30 x 50 cm in size. Larger animals are permitted as long as you pay the price of a travel ticket for animals. Guide dogs for the blind can travel for free on all Trenitalia Frecciarossa trains with no obligation.

Assistance services are available for people with reduced mobility and special needs (individuals in a wheelchair, the mentally handicapped, the visually or hearing impaired, seniors and pregnant women). Request for assistance may be made by contacting Trenitalia’s dedicated call center (local number: 199 303060) no less than 24 hours before train departure.

Venice Canal Historic District (Venice)
Noted for its man-made network of winding waterways, the Venice Canal Historic District was created in 1905 by Abbot Kinney as part of his “Venice of America” vision. In just minutes, a pedestrian walkway can guide you from the city’s hustle and bustle of traffic to the quiet charm of canal life, complete with its water buses, romantic gondolas and quaint waterfront homes.

Michelangelo’s “David” (Florence)
Standing at a towering 17 feet in height, Michelangelo’s marble masterpiece is as impressive to witness in person as one could imagine. A tourist favorite, especially among art enthusiasts, the iconic Biblical hero can be seen on display at Florence’s Galleria dell’Accademia.

Santa Maria delle Grazie (Milan)
A registered UNESCO World Heritage site, the Santa Maria delle Grazie, or “Holy Mary of Grace” perfectly illustrates European architecture and art. The renowned church is also home to one of the most identifiable and treasured artworks in the world: Leonardo da Vinci’s mural, “The Last Supper”.

Two Towers (Bologna)
The Two Towers, both of them tilted on an angle much like the one in Pisa, are the landmark symbols of Bologna. Asinelli Tower, the taller of the two, stretches to just over 97 m in height while Garisenda Tower stands at 48 m. Their names originate from the two rival families credited with building the towers during the early 1100’s in an attempt to determine which was superior. 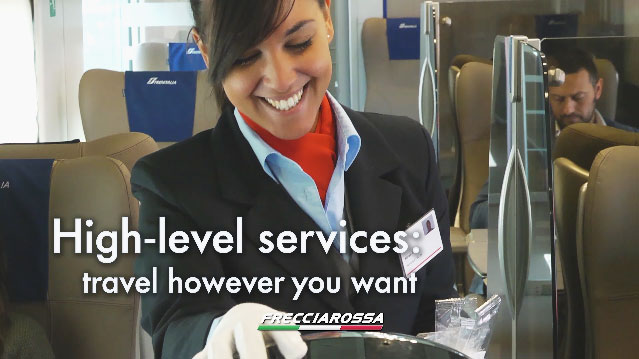 Watch this video: Trenitalia’s high-speed trains, in particular the new Frecciarossa 1000 train. Reaching speeds of up to 300km/h, and up to 111 daily connections Frecciarossa trains offer the ultimate in convenience and comfort. Select the route of your choice between these cities: Turin – Milan – Reggio Emilia AV – Bologna – Florence – Rome...Read More