ICE trains are the flagship of Germany’s Deutsche Bahn railway company. Currently, there are 5 different types of ICE or “Intercity-Express” trains in service: the ICE 1, ICE 2, ICE 3, ICE T and ICE TD. Popular routes include Berlin to Hamburg, Frankfurt to Baden-Baden and Hanover to Munich with frequent, prompt departures every day.

To travel by ICE train, you can purchase a Deutsche Bahn e-ticket which gives you two fare options: Standard Class or First Class seating. If you’re buying more than one ticket though, consider buying a German Rail Pass instead, as it may be cheaper and offers more flexibility.

Book your ticket and discover why ICE is the biggest name in German high-speed rail travel!

Standard luggage (up to 31.5 kg and 120 cm in length) may be kept in the storage area above your seat. Larger items can be placed in the designated storage areas between seats. A door-to-door luggage delivery service is available for a fee.

Bicycles are permitted with a separate bicycle ticket and reservation.

Traveling with your pet dog is permitted at no extra cost if you use a cage or similar transport container. Otherwise, you need to purchase a special half-price ticket so it can travel with you by train. Larger dogs require a leash and muzzle for safety reasons (except guide dogs for the blind). Seats cannot be reserved for dogs.

All ICE trains are user and family-friendly, with special facilities for the disabled and families with infants. Passenger assistance is available at over 300 train stations at no additional charge.

Rail Passes for Travel on ICE Trains in Germany

The Berlin Wall Ruins (Berlin)
This famous dividing wall defined the Cold War for 30 years. In 1989, it was torn down piece by piece, much of it by the neighboring citizens. Today, only fragments of the wall are left, though 3 long segments remain intact within the city; the standing memorials of a nation swept up in political strife.

The Reeperbahn (Hamburg)
Considered Hamburg’s number one entertainment district, the Reeperbahn is a notable street lined with pubs, bars and night clubs stretching through the region of St. Pauli. By day, it’s bustling with shoppers and commuters; at night, the street comes alive as a pulsing nightlife hotspot. The Reeperbahn even helped pave The Beatles’ road to fame during the early 1960s, as the legendary band played a tireless schedule of shows in many of the clubs along the street.

Hanover Zoo (Hanover)
Located in the center of the city, the Hanover Zoo is home to 237 different species of animals, with a total of approximately 3,414 animals in residence. Opened in 1865, it is the fifth oldest zoo in all of Germany and truly a treat for animal lovers visiting Hanover!

Englischer Garten (Munich)
German for “English Garden”, the Englischer Garten is a public park that extends from central Munich to the city’s northeastern border. It is among the largest city parks in the world. In addition to the roughly 75 kms’ worth of walking and cycling paths, there are nearly 9 kms’ worth of flowing streams, more than 100 bridges and an endless array of monuments and recreational facilities on-site to enjoy. 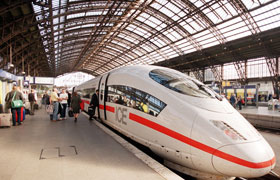 Modern & speedy service Best known for its high speed ICE trains, the German rail network is amongst the best connected in the world and with so many popular cities to visit, traveling by train really is ideal.  From Berlin to Munich to Frankfurt to Cologne, through the Black Forest, along the Baltic Sea, and...Read More