The Hokuriku Shinkansen is the product of a joint venture between the East Japan Railway Company and West Japan Railway Company. A type of Japanese high-speed train, or bullet train, the Hokuriku has been a staple of Japan’s high-speed rail network since 1997. It provides a link between the nation’s capital of Tokyo and Nagano, capital city of Nagano Prefecture (the only exception is between Tokyo and Takasaki, which is largely served by the Joetsu Shinkansen).

Currently, there are two kinds of Hokuriku Shinkansen trains used on the Tokyo to Nagano route: the E2 Series and E7 Series. Both are able to travel at a speed of up to 260kms per hour. Most Hokuriku trains feature three passenger seating classes: “Ordinary Car” (basically standard class), “Green Car” (similar to first or business class) and “Gran Class” (luxury travel at its finest).

From Tokyo to Nagano, the distance is approximately 226 kilometres; the travel time by Hokuriku, 1 hour and 40 minutes on average. Between the two points, the train will make a brief stop in Fukushima, Yonezawa, Kaminoyama and Yamagata.

When you purchase a JR EAST PASS (Nagano, Niigata area) e-ticket, you get unlimited travel possibilities aboard the Hokuriku Shinkansen train between Tokyo and Honshu, the central main island of Japan. This pass also includes travel in select regions of the Joetsu, Tohoku and Yamagata Shinkansen lines. Purchase a JR EAST PASS (Tohoku area) to include travel from Tokyo to Takasaki by Hokuriku Shinkansen. Passes can be used for 5 flexible travel days over a 14-day period.

Get your pass to exceptional value and flexibility as you plan your way across the heart of Japan! 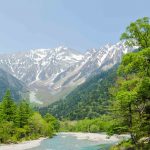 Along the Hokuriku Shinkansen train route

Tokyo Tower (Tokyo)
Standing at 1,092 feet, the Tokyo Tower is Japan’s second-tallest building. Its exterior frame, painted orange and white only, has a shape inspired by Paris’s famous Eiffel Tower. Each year, thousands of tourists visit the tower, particularly for the beautiful panoramic city views seen from its two large observation decks.

Matsushiro Castle (Nagano)
Built in 1560, the Matsushiro Castle was once the home and headquarters for the Sanada clan, a group of powerful feudal lords of Matsushiro Domain during the Edo Period. Ravaged by fire in 1872, the castle was partially restored in 2004 and subsequently registered as a National Historical Site of Japan. Today, a park lush with cherry trees surrounds the site and guests can visit free of charge.

Museum of Modern Art (Takasaki)
Designed by master architect Arata Isozaki, this Takasaki museum opened its doors to the public in 1974. Inside this unique building, you will find a number of famed art collections, including works by Renoir, Monet and renowned Japanese painter Soga Jasoku.

Anraku-ji Temple (Ueda)
A Buddhist temple established towards the end of the 13th century, the Anraku-ji is Nagano Prefecture’s most ancient Zen temple. It is also the only octagonal-shaped (8-sided) temple of its kind in Japan.

Visit Japan with new rail passes by region Choose between the JR EAST PASS (Tohoku area) or the JR EAST PASS (Nagano, Niigata area). Depending on the area of East Japan you want to travel in, you can now choose the pass that best suits your itinerary. Both passes are valid for 5 days of...Read More