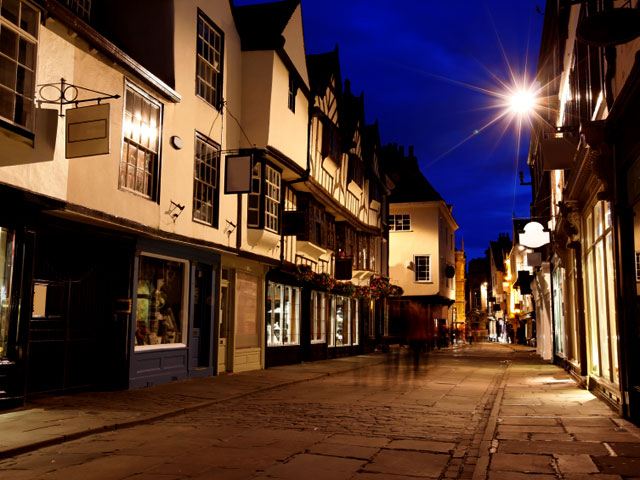 Victims of a tragic fate, souls that cannot rest in peace, spirits roaming around in towns and castles… learn the stories of Britain’s notorious ghosts. This Halloween season, we look at 5 walks and tours that will have you shaking in your boots, so grab your BritRail Pass and head to these famously haunted locations.

The city of York knows a thing or two about ghosts as any resident would tell you. That’s because everyone knows it’s the most haunted city in England! With over 2,000 years of history, it has accumulated its fair share of strange deaths and bizarre stories. So many that it’s no surprise to learn that some of York’s forsaken spirits might have decided to stick around.

The Original Ghost Walk of York dates back to 1973 and is believed to be the oldest such tour in the UK. The tour starts at the King’s Arms pub and follows the River Ouse where many suffered a horrible death by drowning. As you walk down York’s narrow alleys, your guide will recount some of York’s most infamous stories such as the tale of Mad Alice who still haunts the street where she used to live, the story of Roger de Clifford whose body was hanged from is tower and left on display for a year and a day, and the strange tale of the lost boy.

The Original Ghost Walk of York lasts up to 2 hours. The tour departs every night from The King’s Arms Pub at 8 pm. Reach York with a BritRail Pass or BritRail England Pass.

On a Friday morning in 1888, a woman’s body was found brutally slaughtered in a street of Whitechapel. Not only was the throat of Mary Ann Nichols severed but the lower part of her abdomen was ripped open. She was the first of at least 5 victims… and so began the legend of the serial murderer known as Jack the Ripper.

Follow the tale of Jack the Ripper and watch as the story unfolds of one of England greatest criminal case files. The tour includes film clips, photos and moving images, in addition to the gripping tale of the ripperologists who walk the streets as your tour guides. Learn about the terrifying details behind each death, the state of terror that ruled the city and the prime suspects in this fascinating saga.

The Jack the Ripper Tour lasts approximately an hour and 45 minutes. The tour departs every night from Exit 3 of Aldgate East Tube Station in London, reachable with an Oyster card or a London Visitor Travel Card.

Mary King’s Close is an old alleyway that connects to the Royal Mile; the main street of the Old Town of the city of Edinburgh. The close was part of many underground streets that were locked down and built over when the Old Town was modernized. It reached infamy because of stories about roaming ghosts, cruel deaths and unexplained happenings.

Costumed characters take you through a fascinating underground labyrinth while providing insight into the daily life of residents of these once bustling parts of town. They tell the stories of ghost sightings in the close, such as the story of the Coltheart family who were driven mad by visions of dead bodies. You may also hear the story about the ghost of a little girl who cries after being abandoned inside the sealed underground as the Plague spreads.

Llandaff is the ancient city within a modern Cardiff. At nightfall, its old Cathedral, narrow streets and small pubs, replicate the feel of a forgotten village. But beyond the peace and quiet, there’s a disturbing past of war, murders, disasters and tragedies which inspire the many stories and legends of this attraction.

The Llandaff Ghost Walk is one of Wales most famous, as the setting looks the part. Walk around town past the Cathedral, through the cemetery and along the river bank, and each location will have its own tales and stories about spirits and mysterious sightings, such as the mournful white lady or the mythical creature Gwrach-y-Rhibyn. The backdrop to these stories is Llandaff’s history which your tour guide will touch on as you start the tour.

The Llandaff Ghost Tour lasts 2 hours and is a 15 minute bus ride from Cardiff bus station. First, use your BritRail Pass to reach the Cardiff Central railway station, which is adjacent to the bus station. Then, you’ll need to get off the bus on Llandaff High Street and walk up to the meeting point on the Cathedral Green. The tour is offered every Thursday and Saturday night starting at 7:30pm.

Relive 1000 years of Scotland’s gruesome history in a thrilling and light-hearted experience. Exciting rides and re-enacted scenes teach you about true stories and legends that characterized Scotland. What makes the Edinburgh Dungeon special is its black comedy, filled with dark humour so hilarious, it will frighten you.

Go on a hunt to capture legendary cannibal Sawney Bean and his clan, learning in the process such important skills as how to bait a cannibal clan. Step inside the Anatomy Theatre where you’ll witness the autopsy of one of serial killers Burke and Hare’s victims. Learn the glorious tale of William Wallace, Scotland’s greatest hero, who fought for freedom and suffered a grisly execution.  Every corner of this interactive attraction, from the Caves of Galloway to the torture chamber, tells a story that you can see, feel, hear, touch and smell.

A tour of The Edinburgh Dungeon last an hour and 20 minutes. It is open seven days a week and is located 2 minute away from the Edinburgh train station. Reach the station by train using a BritRail Pass, BritRail Freedom of Scotland Pass or BritRail Central Scotland Pass.