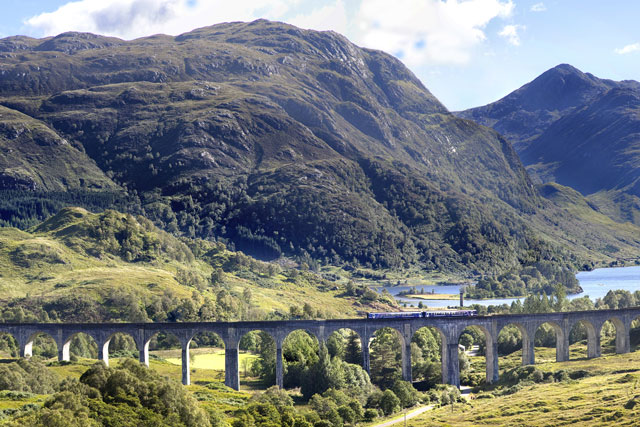 Rolling hills and rugged mountains, the deep blue sea next to the sandy beaches, quaint villages and uncorrupted lands, all of this you can see from the comfort of your seat on Great Britain’s scenic trains. Get a BritRail Pass to explore all of England, Scotland and Wales and be on your way to discover some of Great Britain’s most stunning rail lines.

When it comes to the most scenic journeys, the West Highland Line will find itself on many people’s list. The train line runs in northern Scotland between the fishing port of Mallaig and the city of Glasgow. The segment between Fort William and Mallaig includes the spectacular Glenfinnan Viaduct, a 21-arches long construction that gives an amazing view over the countryside, rivers, valleys and mountains. The Glenfinnan Viaduct is also famous for appearing in the Harry Potter films, representing the rail line for the Hogwart’s Express.

Despite being a short train ride, the St Ives Bay Line has the merits of offering a great panoramic view of the bay. All this while the train sweeps alongside the sandy coast, through Carbis Bay and onto St Ives. It’s truly a remarkable way to reach St Ives before a stay at one of its seaside resorts!

Britain’s northernmost line starts in Inverness, where it shares tracks with the Kyle Line until it reaches Dingwall. Then, it heads north to Wick and Thurso. On this journey across the least populated part of the mainland, you can contemplate the breathtaking and preserved wilderness of northern Scotland.

The Settle to Carlisle line impresses with 17 major viaducts including the Ribblehead Viaduct and its 24 arches crossing the picturesque Batty Moss, its sheep and its limestone pavements. You will also pass through 14 tunnels, the longest being the Blea Moor tunnel running some 500 feet below ground.

The journey along the Cumbrian Coast line goes through amazing sites and iconic landscapes such as The Hadrian’s Wall World Heritage Site and the rolling pastures of the Solway plains. On the Cumbrian Coast line, you travel through part of  the famous Lake District, with its lakes, forests and mountains as backdrop throughout your ride.

The Cotswold Line takes its passengers through rolling hills and from one lovely village to the next as it leaves Oxford. One of the main highlights of this journey is the Ledbury viaduct. Lifted 60 feet above ground, the viaduct is one of the best ways to appreciate the cherished England countryside.

The Conwy Valley Line runs through some of the wildest and most beautiful scenery Wales has to offer. From the bay of “The Queen of the Welsh Resort” to the mining town of Blaenau Ffestiniog, it runs through the contrasting images of rolling pastures and rugged mountains as it reaches the Snowdonia National Park and ultimately climbs 790 feet above sea level.