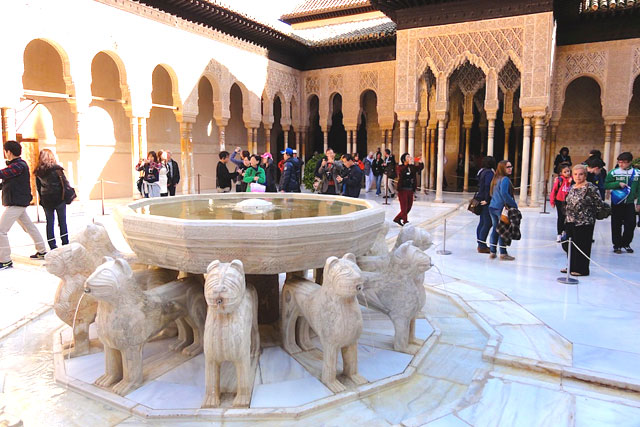 Full-time travellers and podcasters Craig and Linda Martin had the chance to travel with a Eurail Global Pass from ACPRail.com. Here’s a continuation of what they got up to on the third installment of “IndieRail” an independent train adventure through Europe…where they finished up their trip just a little past the Alhambra, Spain.

You can find the first part of their trip — Portugal, Germany, Austria, Slovenia and Croatia — right here.

The second part of IndieRail  — Italy, San Marino, Andorra, Monaco and Nice — can be found here.

As we caught the bus south to Barcelona, we knew things were coming to an end: there were just a few weeks left on our Eurail Pass (which is valid for two months), and Spain was the final country on our itinerary.

Barcelona blew past with long nights chatting with friends, and slow lazy days wandering the city; as did Zaragoza where we checked out its amazing fortress, the Palacio de la Aljaferia — though the joy of Spanish opening hours meant that it wasn’t open in mid-afternoon when we tried to visit!

One of the problems with using a Eurail pass in Spain is that most of the trains require a reservation. You can get these from the ticket office on the day of departure (or the day before if you like to be prepared), or you can buy them online through ACP Rail. For our first journey, we avoided the issue altogether by taking the only regional train of the day from Barcelona to Zaragoza — it added a couple of hours to the journey, but we had time to spare!

For our next journey, from Zaragoza to Córdoba, we bought reservations at the ticket office with just minutes to spare before the train departed — having to pass through a security scanner didn’t help! From Córdoba to Granada, we’d reserved our seats through ACP Rail, and since we were travelling in first class the reservation fee included coffee, a light meal, and a newspaper. And our last journey, from Granada to Jerez de la Frontera, required two reservations — one for each of the Media Distancia trains we had to catch. Luckily reservations on these trains are a lot cheaper than for the fast ones!

The highlights of our journey through Spain were certainly the palaces we visited — the Aljaferia in Zaragoza, the Alcázar in Córdoba, and the Alhambra in Granada. The Alhambra was one of those places where I had to ask, “will it be worth it”? Since it’s famous, it was sure to be packed with people, and it has featured in so many magazines and on so many shows that — to be honest — I’d normally just avoid it. But it took me by surprise. I was enchanted by the gardens, entranced by the fine lines and swirling curves of the buildings, fascinated by the military advantages, captivated by the fine detail of artwork. We were lucky to be there on a quiet day in November: even those crowds were enough for me… but should you visit? Yes: it’s a worthy penultimate stop in your own Eurail adventure before you hit the sherry wineries of Jerez for a well-earned break.